When a sponsorship becomes golden handcuffs 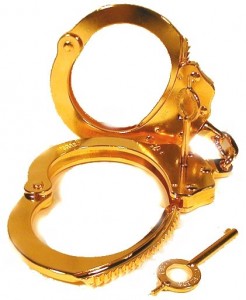 The sponsorship contract has become golden handcuffs. What can the player do?

He could ask the sponsor for a new deal, but tactically and practically it is not always the best ploy. There is really nothing you can do if the sponsor says “sorry, a deal is a deal”.  Or from a cash flow point of view, at that particular time in the sponsor’s financial year, it might just be completely impractical to put a new deal in place.

More often than not the only workable solution is to see the contract out and hope to renegotiate a better deal. This brings the player face to face with that obscure little clause near the end of most sponsorship contracts:  “the sponsor’s right of first refusal”.  It is there for the exclusive benefit of the sponsor, but here are some strategies the player can use to turn the tables.

It is commonly assumed that all the sponsor needs to do to invoke the right of first refusal is to offer a similar deal to the one currently contracted – regardless of how under-priced or inappropriate the sponsorship has become. This is incorrect.  If there is a better deal on offer, the current sponsor needs to match it.

A right of first refusal is also not the same as extending or continuing the contract for a further period. If the sponsor offers the player the same sponsorship benefits for a further period, it can be construed as an offer extending the current contract.  The player can then decline the offer because in exercising its right of first refusal, the sponsor must seek to create a new contract with the player.  By necessary implication it means that the new offer must be better than the previous sponsorship deal.

A “right of first refusal” clause has a prescribed timeframe during which the player will only discuss a new sponsorship with his current sponsor, not any of its competitors. It will be one of the standard sponsorship terms over which the player will have very little bargaining power when negotiating the contract.  If you add to this the fact that some sponsors are just slow and bureaucratic, it becomes obvious that players are at a distinct disadvantage when it comes to re-negotiating their sponsorship deals.  Sponsors use their right of first refusal to play for time, telling the player over and over they are very close to offering him a new deal and then back out at the last minute.  This effectively prevents the player from securing a competitor’s sponsorship.  As a player, you don’t want to find yourself in this position.

The only way out is to force the issue. The player must work with his current sponsor to determine how long it generally takes them to make a decision, and put the making of that decision as far out as possible from the termination date of the sponsorship contract.  Although this would only be an informal arrangement, it will give the player a fair indication of whether a new offer is in the pipeline.  If it looks like nothing will be forthcoming, the player must take the initiative and start looking at other options, while at the same time being careful not to breach the “right of first refusal” clause of his current sponsorship contract.