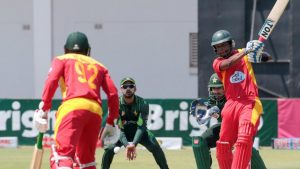 Zimbabwe Cricket and certain of its players are once again involved in a stand-off over money.

Zimbabwe Cricket (ZC) and certain of its players are once again involved in a stand-off over money. The nationally contracted players have not been paid since the end of February and certain of them decided to declare themselves unavailable for the T20 Triangular with Australia and Pakistan until they have been paid. These included some of their top players like Brendon Taylor, Craig Ervine, Sean Williams, Graeme Cremer and Sikandar Raza.

Zimbabwe failed to win a game in the triangular but with a weakened side they acquitted themselves well by pushing both Australia and Pakistan to last-over victories in some matches. If they were at full strength and without the injury to their best bowler, Kyle Jarvis, they easily could have produced an upset or two against the world’s two best white- ball teams.

There is no doubt that Zimbabwe has the talent and cricket culture to be a success in international cricket, especially in One Day and T20 cricket. But then the game needs to be better administered in the country. The players need to be respected and remunerated as international cricketers and the conflict over money must be resolved on a sustainable basis.

The International Cricket Council (ICC) has intervened and ZC has been placed under administration. They we will only receive ICC funding in tranches and they will be audited on all payments received. The ICC is Zimbabwe’s only current revenue stream and the ICC will need to assist Zimbabwe to grow commercially, especially with regards to television rights sales.

Zimbabwe has been given a lifeline as there was talk that they would be banned for two years because of their lack of financial management. Luckily this did not materialise as it would have destroyed Zimbabwe cricket.

However, the current ZC board will need to be replaced with business and cricketing minded people if Zimbabwe cricket is to be sustainable both on the field and commercially. The current board has failed cricket in that country.