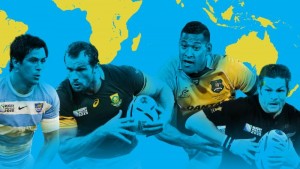 New Zealand has taken a strong stand and players who don’t play professional rugby for their home franchise are not eligible for the All Blacks. It is easy for New Zealand to take this decision because they draw quality players from the South Sea Islands. The changing demographics of their teams bear testimony to this.

Australia have also gone the same route, but for them it has been a much harder decision as they do not have the player base that New Zealand has.  Yet they have stuck to their decision taking the bigger picture into consideration.

South Africa is the one southern hemisphere country that has no policy on overseas based players and they need to follow in the footsteps of Australia and New Zealand for the sake of saving the southern hemisphere game. South African players need to make a decision between playing for the Springboks or playing professional rugby for euros or the yen. They can’t have both as it will be unfair to the South African based players and the rugby fans. The argument that rugby is now a professional game and it should be allowed is naïve; rugby is not soccer. Also, it is not as if the Springboks play as amateurs but are highly paid professionals by South African standards.

If the southern hemisphere game is to remain strong and sustainable the SANZAR nations will need to stand together with regards to selection policies of overseas players. Also, they need to lobby the IRB to place restrictions on the number of foreign players allowed for all professional teams and squads.

The global game can’t afford the demise of the three southern hemisphere giants who have collectively won seven of the eight world cups compared to the northern hemisphere’s one.