Will Kohli eat his words..? 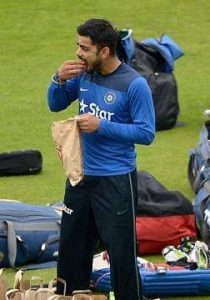 Kohli is arguably the leader of the Fab Four.  He is the only one who averages more than 50 in all three formats.  He has also lead India to the point where they are now ranked No.1 in the world in Test and ODI cricket.  When Kohli therefore expresses an opinion on the game, one should – on the face of it anyway – take it seriously.

At a press conference on the eve of the second Test match between India and Sri Lanka starting in Nagpur on Friday, Kohli revealed that India had demanded fast, green-topped wickets for the Test series in order to prepare them for their tour of South Africa.  The hosts laid out a green pitch in the opening Test match at Eden Gardens in Kolkata, and VCA Stadium in Nagpur is also expected to favour the fast bowlers.

Kohli confirmed recent rumours that the Indian team management had ordered fast pitches, instead of the traditional spin-friendly tracks, to get used to South Africa-style conditions:  “We get only two days before we fly to South Africa after this series is over.  So we have no choice but to be in game situations and think of what’s coming ahead for us.”

To create match conditions in a current Test series with a view to preparing you for an upcoming Test series can only mean that you regard a) your opposition as weak and a walk-over, and b) the current series as “Mickey Mouse” stuff.

Furthermore, it shows scant respect for the integrity of Test cricket and the time-honoured values of treating on merit every Test match and series.  Is it any wonder Test cricket is struggling to survive when one of the game’s leading players makes such disparaging remarks?

The Indian team and Kohli personally have reached their current lofty heights courtesy of a very lopsided international calendar.  A quick overview of the Test matches India has played since the 2013/14 season will show that they have good reason to fear South Africa.

The 2013/14 Southern Hemisphere summer kick-started a sequence where India lost four Test series on the bounce away from home against South Africa, New Zealand, England and Australia.  For the Board of Control for Cricket in India this wasn’t on and they promptly hijacked the international cricket calendar:  From a one-off Test match against Bangladesh in June 2015 through to the current Sri Lankan Test series, India would have played a grand total of four out 31 Test matches outside the Asian sub-continent.  And those four were against the West Indies where conditions are the same as on the sub-continent.

Perhaps Kohli knows what’s coming.  Three Test matches in South Africa might well prove that India isn’t deserving of their current No.1 status after all.  And maybe also that Kohli isn’t the “fabbest” of the Fab Four.