Why can’t we fill our stadiums? 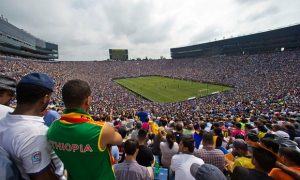 A crowd of 105,826 watched Real Madrid win over Chelsea in a friendly at Michigan Stadium. Photograph: Tony Ding/AP

A friend of mine recently moved to Dallas to take up a position at one of the new American professional rugby teams.  Soon after arriving in the Big D, he was invited to a college football match (i.e. American football).  He was so blown away by the enormity of the crowd and the buzz inside the stadium that he posted of a clip of the crowd on his Facebook page – over 85,000!

On 30 July this year, a near-record crowd of 105,826 saw Real Madrid play Chelsea in a pre-season friendly at Michigan Stadium in Ann Arbor.  The attendance was just under 4,000 shy of the American record attendance for a soccer match, set two years ago at the same stadium when 109,318 watched Real Madrid and Manchester United square off.

English Premier League side Liverpool this season increased the capacity of their iconic Anfield stadium by 8,500 seats to 54,167.  The club has further outline planning permission to extend the stadium’s capacity to around 58,800.  The reason for the expansion:  To cope with the increased demand for match-day tickets.

Why is there this incredible demand overseas to watch live matches while in South Africa we struggle to get people to our stadiums?  Apart from the final, fewer than 50,000 cricket enthusiasts came through the gates to watch the 31 preliminary matches in last season’s Ram Slam T20.  Our soccer stadiums have paltry attendances, except when the Soweto giants, Kaiser Chiefs and Orlando Pirates, square up.  Rugby writers have commented ad nauseam about the poor crowds at this year’s Test – and Super Rugby matches.

The easiest way to explain the difference between our crowds and those overseas is to blame television.  I don’t buy this argument.  The people in Europe and America also have live television of sport events, yet they still go to the stadiums.

Another counter-argument is that the majority of the spectators are blue collar workers (especially for soccer in Europe and in American football).  The stadium, so the argument goes, is an integral part of their quadrangular existence: home, work, pub, stadium.  I’m no sociologist, and this may or may not be so, but the point is they experience their sport live inside the stadium.

When I was a young boy, my most cherished possession (beside my cricket bat and rugby ball) was my Newlands rugby season ticket.  My father not only took me to Western Province’s matches, but also club matches.  At a match between Maties and Villagers, my father said that there were 25,000 spectators.  I don’t know if Newlands could hold so many spectators back in the day, but I believe my father.

I had friends at high school who for five years, come rain or shine, watched each and every one of Western Province’s matches at Newlands.  Most of the time that meant embarking on an arduous train journey of almost two hours from Paarl.  And back again, in the pitch black night, often in the middle of a howling Cape winter storm.

But, alas, sport in South Africa is no longer consumed in this way, and with it a part of our sport culture is gone.  Why this happened, I don’t know.  As with the quadrangular existence, ask the sociologists (or maybe the politicians).  In my opinion, this is the real reason why South Africans don’t go to the stadiums anymore but the Europeans and Americans do.

One final remark:  I’m a sport agent today and only a tiny part in the big sporting landscape of South Africa.  But perhaps I do what I do because of the love for sport my father instilled in me all those years ago when he took me to Newlands.  If we no longer go to our stadiums, our sporting culture will slowly be eroded.  All the tiny parts, like mine, washed away and South Africa’s sporting landscape will become fallow.