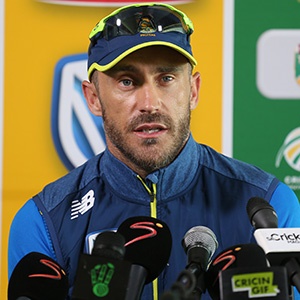 On the face of it, the one match suspension for a slow over-rate handed to Proteas captain, Faf du Plessis, after the second Test match against Pakistan in Cape Town is ridiculous.  But is it really?

Over-rates in Test cricket, and the punishment for failure to adhere to it, were introduced by the International Cricket Council (ICC) in the 1980’s.  At the time the Windies were the kings of the cricket world.  A huge part of their success was based on their fearsome four-pronged pace attack.  In order to keep his bowlers fresh, captain Clive Lloyd (and his successors) slowed down the over-rate.  When wickets started to tumble, the over-rate could go down to as few as 10 per hour.  It was all a bit of gamesmanship but perfectly within the laws of cricket at the time.

However, the feeling was that the opposition teams were being disadvantaged because on average they faced fewer overs than the Windies.  As a result the ICC introduced a new law, setting an average over-rate of 15 per hour over the two innings of a Test match.  So it has been ever since, with allowances made for inclement weather, drink breaks, fall of wickets, injuries, etc.

With the advent of T20 cricket and a greater emphasis on generally speeding up the game to cope with current television and commercial demands, over-rates have taken on a completely different importance.  The ICC match referees therefore police over-rates like hawks, and quite rightly so.

For the most part, over-rates and the punishments that go with it (usually fines or match bans) have worked.  Rarely do we see the old Windies’ tactics to keep the pacemen fresh or teams cynically slowing down play to force a draw.

After the Newlands Test, the umpires formally charged Du Plessis for a slow over-rate and the ICC match referee, David Boon, suspended him for one Test match because the Proteas were one over short of the allotted target.  Last season Du Plessis was guilty of the exact same offence in a Test match against India, but escaped punishment because the match referee deemed it a “minor offence”.  However, the rules also stipulate that another similar offence within 12 months results in an automatic one-test suspension.

In the days since the sentence was passed, Boon has come in for some criticism.  In my opinion, however, he cannot be blamed.  He was only applying the laws.  The crux of the matter appears to be that the match referee has no discretion in such a scenario.  We are left with a situation where the laws of the game our out of kilter with reality and common sense has been chucked out the window.

It is inconceivable that the Newlands Test match could be regarded as “slow”.  The facts cry to high heaven:

The rules of cricket have gone mad again.  Surely it cannot be too difficult for the ICC to allow a match referee some discretion and common sense in a scenario such as this.  Instead the game will be poorer now because the Proteas will play the final Test match without their skipper.  Imagine if it was a series-deciding match…