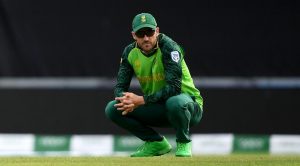 Can the Proteas be motivated to play above their ability? (Faf du Plessis © Gallo Images)

The Proteas were comprehensively swept aside by England and India in matches one and three respectively.  They put up a better fight against Bangladesh, but were ultimately still easily beaten by 21 runs.  (Perhaps the most telling statistic from that match:  The Tigers’ 330/6 was their highest total ever in the 363 ODI’s they have played to date, including matches against minnows like Bermuda, Canada, Hong Kong and Kenya!)

Six matches remain for South Africa in the preliminary rounds. Mathematically they can still reach the semi-finals, but to do that they need an unlikely six wins out of six.  Maybe a team can sneak into the play-offs with five wins.  But how plausible are even five wins from their remaining six fixtures: West Indies, Afghanistan, New Zealand, Pakistan, Sri Lanka and Australia?

The team looks a shadow of any of its seven predecessors.  On current evidence, does it look like any batsman can score a century?  No.  Any bowler produce an inspired spell of bowling a la Meryck Pringle against the Windies in Christchurch in 1992?  No.  Even the fielding, for so many years a hallmark of the Proteas’ ODI cricket, is atrocious.  Sure, the spate of injuries (Hashim Amla, Lungi Ngidi and Dale Steyn) has not helped, but still…

The frightening thought, though, is that this is the best we have.  Well, almost.  In my opinion players like Reeza Hendricks and Vernon Philander would have made the side stronger, but would they have reversed the England and India losses?  I don’t think so.

The current squad is so weak either because there is something seriously wrong with the South African domestic system and it is not producing better players, or we simply have to accept that (apart from Quinton de Kock and Kagiso Rabada) the country is going through a lean spell of world-class players, coming at a particularly inopportune time.  Only time will tell which it is.

For now until the final preliminary match against Australia on 6 July at Old Trafford in Manchester, there is only one hope for the Proteas:  That Faf du Plessis and the rest of the senior players can somehow miraculously motivate the players to such an extent that they play above their ability.  A whole-hearted, concerted team effort based more on guts than ability and applying the old maxim of the whole being more than the sum of its parts is the only thing I can see that could lift the Proteas out of this mire.

Stranger things have happened in sport, but in your heart of hearts you just cannot see it happening to the Proteas at the 2019 CWC.  I hope I’m wrong.