We are bleeding cricketers 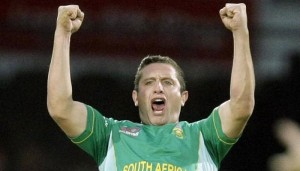 Former Proteas player Roelof van der Merwe has made himself available to represent the Netherlands, leaving the Titans franchise after more than a decade.

On 30 June we were greeted with the news that the limited overs specialist, Roelof van der Merwe, has made himself available immediately to represent the Netherlands after receiving his Dutch passport.  This is nothing new; many South African cricketers hold dual citizenships.  The worrying aspect was that, according to media reports, the former Proteas player has decided to completely cut ties with South African cricket, leaving the Titans franchise after more than a decade, and that Van der Merwe “will now seek a team in England”.

This follows in the wake of a similar decision taken in April by another former Proteas player, Jacques Rudolph.  Earlier this year another former Proteas player, Colin Ingram, signed for English county Glamorgan and became a Kolpak player, thereby for all practical purposes calling time on his international career.  Unlike Van der Merwe and Rudolph, Ingram will continue to play domestic cricket but the prospect of prolonging his career by only focussing on county cricket is something that must be in the back of his mind.

After long and distinguished careers, “cashing in” have no doubt played a role in their respective decisions but all of them still have plenty of cricket in them.  Van der Merwe has openly declared his availability for the Netherlands and that he is looking for a county contract.  Ingram turned 30 only last week and Rudolph is 34.

The sad fact is that these players’ cricket acumen is either completely lost or no longer ours alone, and South African cricket is the poorer for it.  Under the circumstances one wonders what the powers-that-be have done or intend doing to keep players of their ilk in the South African cricket system.

Now, one can already hear the cricket politicians shouting “go if you don’t like it here”, especially to the white players.  Such a response would be simplistic and outdated.  It would also be disrespectful towards players like Rudolph, Van der Merwe and Ingram and the contribution they have made to the transformation of cricket in this country.  Most importantly it skirts the real issue:  All players, even seasoned professionals, are uncertain about their place in South African cricket.

Put yourself in the shoes of Van der Merwe:  After all you have given to South African cricket and still being at the top of your game (he was the Titans’ leading run-scorer in the Sunfoil Series last season), are you willing to suffer the embarrassment of being dropped not on merit but for the sake of transformation?  I don’t think so.  But even worse, the irony of such a scenario is that you then ultimately undermine transformation!  Who better than someone like Van der Merwe to sit next to the talented black debutant in the Titans’ change room..?

And that is just the bleeding at the top end.  Why do players like Keaton Jennings (23), Tom Curran (20) and Bradley Wheal (18) see no future in this country?  Where they are in their careers, money can’t be the issue.  Are the reasons for their decisions being addressed or must we assume Cricket South Africa (CSA) just don’t care?

More than money, quotas or anything else it is uncertainty that is killing South African cricket.  If CSA cannot tell South Africans in clear terms, sooner rather than later, what the transformation targets are, it will continue to undermine itself and will never give our national teams a fair chance to reach their full potential on the international stage.