Want to be rich? Then play here… 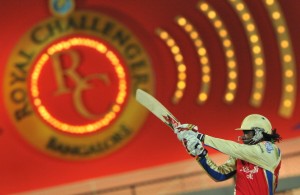 The best-paid cricketers all play for IPL teams. In 2014 the Bangalore Challengers paid their players an average of almost £2,7 million and is 41st on the global list. (Photo credit: Manjunath Kiran/AFP/Getty Images)

On the back of a take-over by the oil-funded Qatar Sports Investments (QSI) in 2011, the 2014/15 league title was PSG’s third in a row and transformed all their players into soccer millionaires. The average salary of a first-team player at PSG for 2014/15 was £5,3 million per year, or just under £102,000 per week.

Among the top 12 payers, eight are soccer teams, three baseball teams and one basketball team. Four of the 12 top payers are based in America, four in England, two in Spain and one each in France and Germany.

Many of the best-paying teams have super-rich owners with multiple interests in sport. For example, American billionaire Stan Kroenke is the major stakeholder in Arsenal and he also owns the Denver Nuggets. His compatriot John W. Henry owns Liverpool and the Boston Red Sox via his Fenway Sports Group. Russian billionaires Roman Abramovich and Mikhail Prokhorov own Chelsea and the Brooklyn Nets respectively.

Yet all these mega-wealthy people look like financial small fry against the owners of PSG and Manchester City. Qatar’s sovereign wealth fund, which draws from the same resources that fund PSG’s owners QSI, has an estimated US$304 billion under investment. The sovereign wealth fund of Abu Dhabi in the United Arab Emirates (UAE), which has Manchester City’s owner Sheikh Mansour on its board of directors, has assets estimated at US$773 billion. The richest sports teams in the world are increasingly running on oil:

• One of Real Madrid’s major sponsors is Abu Dhabi-based International Petroleum Investment Company, where Mansour is chairman of the board.

• The New York Yankees and Mansour are the co-owners of the American soccer team, New York City FC.

• Manchester City’s sponsors include Etihad Airways, telecoms company Etisalat and investment company Aabar, all based in the UAE.

• Etisalat is also a sponsor of Barcelona, who has a shirt deal with Qatar Airways.

The NBA is the highest-paying league as a whole. For the 2014-15 season, basketball players earned an average of £2,67 million (about R53 million) per year each. The EPL is the best paying soccer league in the world, with average annual pay at £2,23 million (about R44 million) per player.

As would have been expected, the best-paid cricketers all play for Indian Premier League teams. In 2014 the Bangalore Challengers paid their players an average of almost £2,7 million and is 41st on the global list. They are followed by the Chennai Super Kings (42), Mumbai Indians (43), Sunrisers Hyderabad (45), Kolkata Knight Riders (47), Delhi Daredevils (48), Rajasthan Royals (59) and Kings XI Punjab (61).

No rugby union team is among the top 300 global teams.