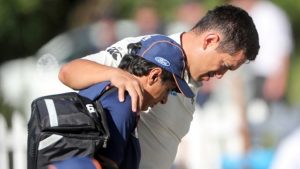 The injury to Ross Taylor in the first Test match being played in Dunedin has once again illustrated that the International Cricket Council needs to relook the law that does not allow players injured in a match to be replaced.

Cricket is the only team sport in the world that does not allow replacements. In fact, they have become even more rigid by not allowing an injured batsman to have a runner.  Over the history of Test cricket, there are many more examples of this.  Once again it has reduced a Test match to an uneven contest.  Injuries form part of any sport, on and off the playing field, and should be catered for in a professional and fair manner.

Rugby used to have the same laws but this all changed way back in 1968 in a Test match between the Springboks and Lions at Loftus Versfeld.  Mike Gibson replaced the injured Barry John at fly-half early in the first half to ensure a fair contest in front of a capacity crowd. At the time replacements were also not part of rugby but Danie Craven, who was then the President of South African rugby, approved the replacement because he had a much bigger vision. This has led to a rugby replacement policy that has not only ensured a fair contest but has been used to enhance the game.

Why has cricket languished so far behind in this basic area when it is obviously strategically correct for the game and easy to manage? In the professional and commercial era it is important to ensure that cricket remains a fair contest at all times for spectators and commercial partners.

The other law that makes no sense is the awarding of a boundary when the ball does not actually touch the boundary but the player’s body has while attempting to stop the ball. These moments are usually referred to the television referee to be the final adjudicator on the matter and this takes time out of the game. The process not only wastes time but adds further pressure to the television umpire.

Once again it is a simple matter:  If the ball does not touch the boundary it should not be four. This will ensure that time is not wasted during the match and, more importantly, that good fielding is rewarded.

Cricket has been a leader in sport, especially with regards to technology and other similar innovations. However, it is difficult to understand why they have not got these two basic laws correct.