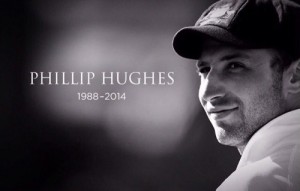 Hughes lost his life playing the game he loved.

The tragic death of Australian batsman Phillip Hughes shocked the cricketing world. It rekindled memories of the death of Chris Burger, the Western Province fullback who broke his neck in a Currie Cup match in the Free State Stadium during the 1980’s. It left fans with the same sense of loss and sadness.

It was fantastic to see how the cricketing fraternity around the world rallied in mourning the death Hughes and celebrating his life.  It proved that cricketers have a special bond that is above race, religion or creed. It was wonderful to witness and experience.

The untimely death of Chris Burger lead to the establishment of the Chris Burger fund that today raises millions of rand to assist rugby players that are severely injured during matches. This is a great legacy for a man who lost his life playing the game he loved.

It remains to see what legacy will be borne out of the tragic death of Hughes who also lost his life playing the game he loved. If showing a troubled world that diverse cricketing nations can unify under the human spirit, he would not have died in vain.

There has been talk of banning the bouncer, but that would certainly destroy the great game of cricket. It would take away the heavy artillery of the fast bowler and the game will never be the same again. The great memories of cricket are about fast bowlers like the “Bodyline Series” Harold Larwood and Bill Voce, the Dennis Lillee and Jeff Thomson era, the West Indies in the 1970’s and 1980’s and recently Mitchell Johnson in the Ashes Series in Australia.

Rugby never banned the up and under that resulted in the death of Chris Burger, but they refined the laws to protect the players. Cricket needs to do the same and the equipment manufactures need to improve the protective wear.

Rest in peace Phillip Hughes and thank you for the memories.