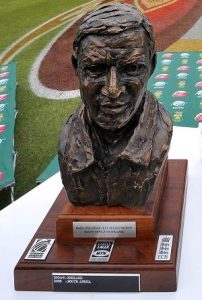 The Proteas are defending a proud record in England and one hopes that it will not be blemished by the imperfect build-up.

Proteas coach, Russell Domingo, recently said that a tour to England is always something “you want to be a part of”.  But the Test series will be a very tough assignment considering the circumstances leading up to the first match at Lord’s.

The last Test series in England was in 2012.  South Africa had a settled side – eight players were also part of the historic 2008 Test series victory and the likes of Graeme Smith and Jacques Kallis were in their prime.  They also did some serious planning, including a camp in Switzerland under the guidance of South African-born adventurer Mike Horn.  But most importantly, the Proteas had a massive incentive:  to claim the Test mace.

This time, just about everything is different from 2012.  The stakes are not so high again.  Even if South Africa wins the series 4-0, they will not be able to move from their No.2 spot.  At best, they will close the gap on India to one point.

Most importantly, the squad is far from settled.  For starters only five players from the 2012 triumph will return:  Hashim Amla, JP Duminy, Faf du Plessis (and he won’t even be there for the first Test), Morne Morkel and Vernon Philander.

Du Plessis has been forced to sit out the first Test after the arrival of his first child.  Under his captaincy and strong leadership, the Proteas climbed from No.7 in the Tests rankings in August 2016 to No.2 and have been unbeaten in four Test series (including one away to Australia).  During this period, South Africa managed well without stalwarts AB de Villiers and Dale Steyn, but losing Du Plessis is a big blow.

The Proteas brains trust has decided to replace Du Plessis as captain with Dean Elgar.  Elgar is a strong character and he might take to the job like a duck to water, but he is inexperienced.  Elgar has only captained in seven first-class games.  In fact, one wouldn’t even describe him as a settled international player; after 35 Test matches his average is still under 40.  Perhaps more telling, Elgar’s appointment is a comment on the lack of leadership in the squad.  Among the senior players, Amla simply doesn’t want the job, Duminy is in under severe pressure to retain his place (his Test record is even worse than Elgar’s) and Morkel is the only quick to have played more than 50 Tests.

Furthermore, the uncertainty regarding the futures of De Villiers and Domingo is unsettling.  De Villiers has taken a sabbatical from Test cricket but has not made any formal announcement on his Test future.  The situation might be good for him personally but it’s bad for the Proteas.  Because De Villiers would be a natural selection if he returns, it means that whoever one regards as filling in for him will see his position as exactly that – a filler.

When the Proteas left our shores, the future of their head coach was still uncertain.  The incumbent, Domingo, would be in the hot seat until after the England tour but at that point he hadn’t reapplied for his job.  It has since emerged that he has reapplied and has already been interviewed.  This has no doubt taken away some uncertainties but has still not been the ideal preparation.

The Proteas are defending a proud record in England and one sincerely hopes that it will not be blemished by the imperfect build-up.  This millennium, South Africa has had more success in England than any other touring team.  They are the only visiting side to have won more than they have lost and they have triumphed twice as many times as they have been defeated.  The Proteas’ win/loss ratio is 2; a distant second is Australia with a 0.727 ratio (8 wins and 11 losses).  Since 2000, South Africa has not lost a series in England, with a drawn series and two victories.  If nothing else, maintaining this proud record should spur them on.