Time to redress the imbalance 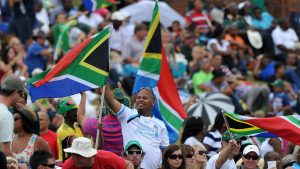 The commercial development of cricket is lagging in South Africa. Credit © AFP

“The focus on south Asian communities, the focus on women, building a new T20, making sure that the World Cup in 2019 is a fantastic platform for growth for cricket in this country, the investment in our teams to make sure that we’re always fighting at the top of the rankings for all three formats: these are all critical things for us to ensure that the next time we go to market we’re ensuring… cricket’s future.”

Sounds like familiar rhetoric coming from Cricket South Africa (CSA).  Only this time the person speaking is the England and Wales Cricket Board’s (ECB) chief executive Tom Harrison in a recent interview with the authoritative sports news website SportsPro Media.  In the interview Harrison goes on to outline in great detail how the ECB wants to grow the game in England until 2024 and beyond, especially the role television will play in this process.

In the aftermath of the chaos at CSA following the sudden resignation of former chief executive Haroon Lorgat and the cancellation of the inaugural T20 Global League, Harrison’s comments two weeks later cannot be in sharper contrast.  The one organisation clearly knows where it’s heading, the other clearly not.  Is it any wonder England walloped the Proteas earlier this year?

Granted, in many respects it would be unfair to make a direct comparison between England and South Africa.  England is the cradle of cricket and Lord’s is still encapsulates the game’s spiritual home.  Economically there is a massive divide between the countries; according to the World Bank the United Kingdom has the fifth biggest economy in the world, South Africa is 39th. Socio-politically South Africa and England are worlds apart.

But is that any excuse for a clear commercial vision for the game in this country?  Of course developing the game and taking it to the communities that were previously excluded from cricket is crucial for the future of cricket in South Africa.  However, one cannot help but feel that it is sometimes done at the expense of the commercial growth of the game.

One gets the sinking feeling that commercially-speaking South Africa is just, little by little but surely, always falling behind the rest of the world.  Something has to be done about redressing the balance between development and commercialisation.  At the moment the scales are heavily tipped in favour of the former.

In his interview Harrison went on to say that the ECB has deliberately embarked on a journey “to create something (new). We’ve got to do things differently. Otherwise, you’re effectively managing decline, such is the competitive landscape that we operate in.”

If we cannot also create an exciting product and make cricket relevant to South Africans in 2017, then no amount of grassroots development plans will ever be enough to grow the game in this country and it will decline.