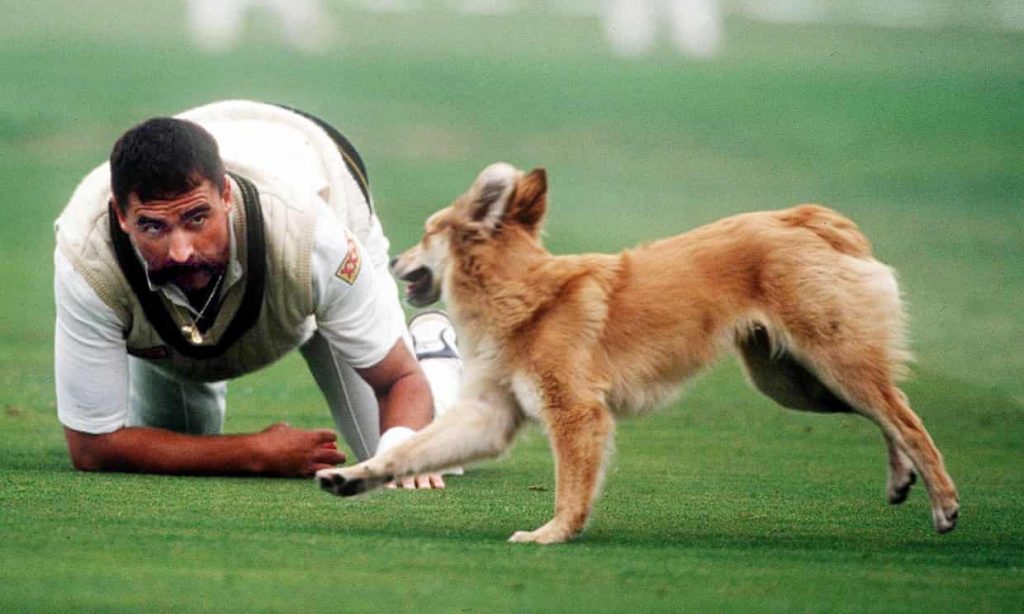 Last Sunday a T20I match between India and Bangladesh was nearly called off because of pollution.  Delhi was choking to death in the aftermath of all the Diwali fireworks.  Eventually the smog lifted and a full game was possible.

In the history of cricket there have been a plethora of reasons for halting play – sometimes serious (like death, the outbreak of war, bomb threats and earthquakes) and at other times just plain extraordinary.  Remember the oil on the pitch at the Headingley Ashes Test match in 1975, or the disorientated man who this week two years ago drove his car onto the pitch in a Ranji Trophy match in New Delhi?

But what are some of the more quirky reasons for holding up play?

Cricket is a game dictated by the weather.  So it’s not surprising for play to be halted by snow, fog, gale force winds, excessive heat, excessive cold, lightning or a sand storm.  But it is amazing how many times play has been stopped because of the sun’s reflection!

The County Ground in Derby is infamous for “sunny troubles”.  In 1963 a game against Essex was held up for 15 minutes because the sun was reflecting off the windshields of cars belonging to the cricketers themselves. The players had to move the offending vehicles before the game could be continued.  In 2007 the home team had just begun their chase of Yorkshire’s 253 in a 50-over game when the openers complained that the white ball was impossible to see against all sorts of reflections caused by the setting sun.  Play was held up for 45 minutes for the sun to completely disappear below the horizon.

In 1995 a Test match at Old Trafford between England and West Indies was stopped because there was a reflection of sunlight off an adjacent greenhouse.  The umpires concluded that the light was too strong for the match to go on. An early tea was taken. (Incidentally, streakers, both male and female, also held up play in spurts.  It must’ve been a memorable day of Test cricket!)

With breaks in play called “lunch” and “tea” you’d think that cricket and food always co-existed happily.  But, no.

Starting with the eccentric, the normally charming England skipper Colin Cowdrey was at his haughty best in Lyallpur, India in 1969.  Cowdrey refused to start their friendly match against Central Zone without being served tea.  The English were harried with some pathetic scheduling and mismanagement on the tour and Cowdrey just got fed up.  His insistence resulted in a delay of almost two hours.

In a match between Border and Boland during the 1994-95 season, Daryll Cullinan hit Roger Telemachus for a six and the ball landed in a pan of fried calamari.  It took ten minutes for the ball to cool down, but even then Telemachus could not grip the greasy ball causing even further delay.  ‘Fried calamari stopped play,’ reported Wisden.

In 2017 at a Sheffield Shield match between Queensland and New South Wales in Brisbane a fire alarm went off in one of the stands and the umpires suspended play because of the commotion.  The fire trucks arrived at the stadium in no time, evacuated the stand and with little fuss sorted out the problem.  Play resumed after about an hour.  Australian spinner Nathan Lyon later admitted that it was his attempts at preparing a piece of toast that caused the alarm.

And finally, just about anyone who’s ever put on a pair of cricket boots can tell you a story about a dog straying onto the field.

The most spectacular dog story happened at the Trent Bridge Ashes Test in 1993.  A mongrel nonchalantly strolled onto the field just as the burly Australian Merv Hughes ran in to bowl.  Hughes halted his run-up and approached the dog.  He got down on his knees and beseeched the dog to leave.  To everyone’s astonishment, the mutt agreed.  Teammate Michael Slater carried the dog away and it was promptly adopted by one of the spectators.  Rumours are he christened the pooch ‘Merv’.

During a Surrey-Yorkshire county match at Guildford in 2002, a ball hit for four disappeared under the press tent beyond fine-leg.  When it was finally retrieved after a lengthy search, the ball had unusual signs of tampering and had to be changed.  Inquiries later revealed that the faithful Labrador of one of the journalists was the offender.  The sudden appearance of a red ball had delighted the dog no end and he proceeded to mangle it beyond recognition.