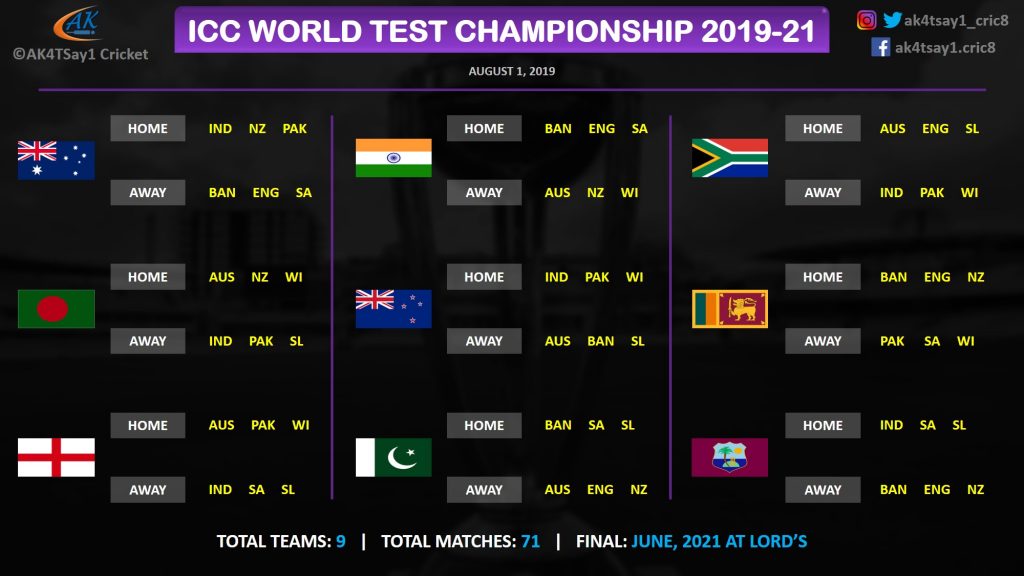 At the time of posting this article, the International Cricket Council’s (ICC) latest brainchild, the World Test Championship (WTC), will be one day old.

The big driving force behind the ICC introducing the WTC was the lack of context the majority of Test series have had over the last two decades.  One Day International cricket has had a World Cup since 1975 and co-existed (largely) peacefully with Test cricket.  However, the advance of T20 cricket and the first world title in this format in 2007 has radically eroded Test cricket of context.  Since then too many bilateral Test series were just too often being described as “meaningless” (i.e. having no context).

The Test rankings gave the countries something for which to play.  The top ranked team on 1 April every year was rewarded by the ICC, so Test cricket had a semblance of context.  The WTC will create a Test cricket “winner”, like the World Cups in other formats, creating something else to play for outside of the series result. It is also hoped that it will increase interest in all series within the WTC, regardless of who is playing, because it can have a knock-on effect on other team’s chances of reaching the final.

With more than a hint of irony, the first Test matches of the WTC will be the series that through Test cricket’s identity crisis has been the one that has always stayed meaningful and had context:  The Ashes.

The WTC is a league for Test cricket and will be contested over cycles of two years at a time.  Starting with the Ashes, the first cycle will end on 31 March 2021, after which the top two teams will play in a final.

Nine of the twelve Full Member countries will contest the WTC in the first cycle:  Australia, Bangladesh, England, India, Pakistan, New Zealand, South Africa, Sri Lanka and the West Indies.  Zimbabwe, Afghanistan and Ireland are not included – Zimbabwe because of its current ICC suspension, and Afghanistan and Ireland because they only became Full Members very recently.

What does give the WTC a bit of a hollow ring is that the teams will only play a maximum of three series each at home and away.  Therefore, all the teams do not necessarily play each other in a given WTC two-year cycle.  The competing countries themselves decide on which series will be played under the WTC.  It leaves the door open for countries like India to bully around financially weaker countries like Bangladesh and the West Indies.

The WTC league will work on a points system.  120 points are available for every series in the WTC, distributed evenly over the number of Tests in the series.  For example, in the Ashes, which is a five-match series, there will be 24 points for each win. In a two-Test series (e.g. Sri Lanka v New Zealand which starts later in August) there will be 60 points for a win. A draw is worth one-third of the points (i.e. 8 in the Ashes and 20 in a two-Test series).  Two points will be deducted for slow over-rates.

The top two teams on the points table at the end of the league phase will play the final.  If the final ends in a tie or a draw, the two teams will be joint champions.  The WTC playing conditions allow for a reserve day, but it can only be used if net playing time is lost during the scheduled five days of the final.  Net playing time for any Test match is 30 hours (six hours per day).

May the best team win!