The red lights are flashing for South African cricket 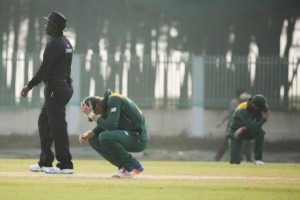 The South African U.19 team has been in free fall. Their recent loss to Namibia in the ICC U.19 World Cup must be the lowest point in the history of South African international cricket.

South African cricket is experiencing a very difficult home summer with the defeat to England in the Test series. The series was done and dusted before the fourth Test at SuperSport Park. Not too much should be read into the South African victory in the fourth Test as it was a classic dead series match where the team that has won the series loses its focus. The statistics of dead series matches prove this point. The defeat was on the back of a damaging three-nil Test series loss in India.

The South African ‘A’ team was also badly beaten by England in both tour matches. In the first-class match in Pietermaritzburg, the ‘A’ team lost by an innings and in the 50-over match in Kimberley they were beaten by 163 runs. In real terms, the ‘A’ team failed to compete and this leaves serious questions about the depth and competency of South African cricket.

After being crowned world champions at the previous World Cup in 2014, the South African U.19 team has been in free fall under new coach Lawrence Mahatlane. They lost heavily in two series, home and away, against Bangladesh. Their recent loss to Namibia in the ICC U.19 World Cup must be the lowest point in the history of South African international cricket. They have failed to make the playoffs and will now compete in the Plate. This is unacceptable for a cricketing nation with its historically excellent schools cricket system and high performance programmes that cost millions of rand.

The franchise system is at an all-time low with regards to standards, profile and sponsors. In fact, the franchise game is no longer a professional product as it is too weak and is on the verge of collapse. This is reflected in the attendances, as the fans are voting with their feet, and also the inability of a franchise like the Cobras to secure a team sponsor. The poor performances of the SA ‘A’ team are a direct result of a poor franchise system.

Cricket South Africa (CSA) is currently financially strong as they have been able to sell television rights around the world because of a strong cricket product. With this product now in decline, it will have an impact on the future values of television contracts. In turn this will have an impact on the financial stability of CSA and its ability to fund cricket in the country.

South African cricket is headed in the same direction as West Indies cricket and CSA probably have a five-year window to rectify the situation. They have to review their policies and lift the standards in the boardroom, on the field and in coaching structures to name but a few areas. Failure to address the situation will see the demise of the South African game as we know it.