The punishment should fit the crime 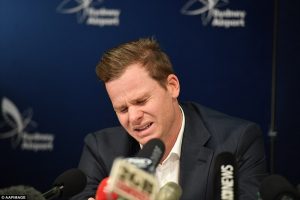 If ever in the history of professional cricket a player has been the victim of circumstances, then Smith is the one.

Ball-tampering is a serious issue in cricket.  After match-fixing it is the sport’s biggest curse.  The plan that Steve Smith, David Warner and Cameron Bancroft concocted last Saturday at Newlands in the third Test against South Africa to alter the condition of the ball should therefore be condemned in the strongest possible terms. It is cheating and must be punished.

In 2013 South African captain Faf du Plessis was at the centre of a ball-tampering scandal in a Test match against Pakistan.  (At the time Du Plessis was not the captain.)  He was caught rubbing the ball on a zipper on his trousers.  Du Plessis admitted guilt.  The match referee awarded Pakistan five penalty runs and fined Du Plessis 50% of his match fee, but there was no suspension.

At Newlands Bancroft was caught rubbing the ball on a piece of sandpaper; he was doing so with the blessing of his captain, Smith.  After the day’s play Smith and Bancroft owned up at a news conference.  The International Cricket Council (ICC) suspended Smith for one Test and also fined him 100% of his match fee.  Bancroft was handed three demerit points (but no match suspension) and fined 75% of his match fee.  Warner’s role in the debacle came to light later; he was never formally charged by the ICC.

However, worse was to come for Smith and Bancroft, as well as Warner.  On Wednesday Cricket Australia (CA) banned Smith and Warner from all cricket activities for a year and Bancroft for nine months.

How is the huge discrepancy in Du Plessis and Smith’s punishments possible?

Firstly, Du Plessis was punished by the ICC only.  Cricket South Africa (CSA) did nothing about the affair.  Smith on the other hand has been punished by the ICC as well as CA.  One can safely assume that there would be clauses in Smith’s CA contract about disciplinary matters and procedures.  But still, isn’t there perhaps a case to be made that Smith has been tried and convicted twice for the same offence?

Secondly, if ever in the history of professional cricket a player has been the victim of circumstances, then Smith is the one.  The massive public and media reaction to the incident, especially in Australia, has been unprecedented.  People jokingly used to say that the Australian cricket captain is more important than the Prime Minister.  This is apparently no joke after all.  The Australian public forced CA to come down hard on Smith (and the other two) in a manner more reminiscent of CSA’s reaction after Hansie Cronjé’s match-fixing revelations.

The severity of the punishments is so astonishing that one has to conclude other factors were also considered that have little to do with ball-tampering.  For one, it will still be fresh in the minds of the CA executives that Smith and (in particular) Warner played an active role in last year’s acrimonious pay dispute between CA and the players.

Also CA would have noted with alarm the schadenfreude of the rest of the cricket world at their predicament.  What came out was an accumulated distaste for the Australian team’s approach to the game: an aggressive, win-at-all-costs mentality mixed with self-righteousness and hubris.  Not a pretty picture but one which CA could instantly touch up by getting rid of the captain and vice-captain in one swoop.

Giving Bancroft a nine months’ suspension and Smith and Warner three months more also shows CA definitely had an axe to grind with the latter two.  All three were in on the plot in equal measure.  If CA had focussed only on the facts, all three should have received the same sentence.

Smith and Bancroft’s teary news conferences after hearing their fate seemed to indicate that even they didn’t believe the punishment would be that harsh.  If by the punishment CA also wanted to degrade the two men, they certainly succeeded.

To send out a message of intent, CA used a sledgehammer to kill a fly.  Only the future will tell whether or not the message got through.  For the present, can CA honestly say that the punishment fitted the crime..?