The Proteas’ series victory in numbers 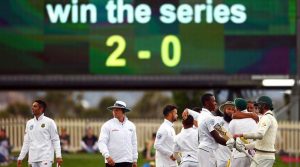 Cricket is a game of statistics. Photo credit: REUTERS/David Gray

The Proteas’ remarkable Test series victory in Australia has been lauded all around the world.  It is well deserved.

Cricket is a game of statistics and the series Down Under has served up a veritable smorgasbord. Nibble on some of these titbits and enjoy if you’re a South African.  It might take another 100 years before anything remotely akin to this happens again!: