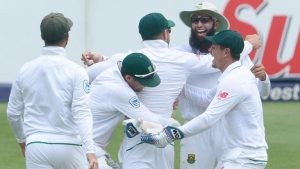 That the Proteas are a rejuvenated side, of that there can be no doubt. Whether it can be sustained will be the challenge.

In May last year the Proteas had dropped to No.6 in the ICC Test rankings.  At the time I wrote in this column that the Test team was in free-fall and strongly disagreed with the powers-that-be at Cricket South Africa that it was only a “short-term issue”.

But over the past eight months, it certainly looks like the Proteas have turned things around (and I might have to eat my words!).  In a home series in August the South Africans beat New Zealand 1-0 in a 2-match series; the other Test match was rained out.  In September they beat Ireland in a one off ODI, followed by an awe-inspiring 5-0 whitewash of the Australians in a home ODI series.  The Proteas then went Down Under for a 3-match Test series and prevailed 2-1, the only blemish being a dead rubber loss in the Adelaide day/night Test match.  Recently Sri Lanka was whitewashed in a 3-match Test series in South Africa.

Even more impressive, however, were the margins of victory in the Tests.  The opponents weren’t beaten, they were obliterated:  Against New Zealand at Centurion by 204 runs.  Against Australia in Perth in the first Test by 177 runs and in the second in Hobart by an innings and 80 runs.  Against Sri Lanka in the first test in Port Elizabeth by 206 runs, in the second at Newlands by 282 runs and in the third at the Wanderers by an innings and 118 runs.

Three T20I’s and five ODI’s against Sri Lanka now lie ahead.  One can only see the Proteas (even with a second string team in the T20I’s) dishing out more of the same medicine against the hapless islanders.  The one T20I, five ODI’s and three Test matches away to New Zealand in February and March will be a relatively tougher assignment.  The white-ball matches could be close (New Zealand are always very good in the shorter versions of the game), but one cannot see the Black Caps being a match for the Proteas in the Test series.

The Proteas’ impressive run will in all likelihood continue through the Southern Hemisphere summer.  It will be over the ensuing twelve months that the team will be tested:  The tour of England from May to August, incorporating the ICC Champions Trophy in June (will the Proteas eventually win a global tournament..?), will be a really tough challenge.  The home series against Bangladesh from September to October 2017 should be a doddle.  But then they tackle India from December to February 2018 and the Aussies in a four-match Test series in March.  Fortunately both these tours are on home soil.

The Proteas’ recent victories were built on really solid performance by their bowling attack.  There is not much to worry about in that department, even with the international retirement of Kyle Abbott.  The amazing thing is that they’ve achieved their success with an AB de Villiers-less batting line-up.  Individually the top six of Dean Elgar, Stephen Cook, Hashim Amla (in his current form), JP Duminy, Faf du Plessis and Temba Bavuma wouldn’t give a decent international bowling attack any sleepless nights.  But as a unit, when the chips were down, they have performed astonishingly well.  The batsmen will be sorely tested on the English wickets.  In the long-term, the top six could yet be exposed as the team’s Achilles heel.

That the Proteas are a rejuvenated side, of that there can be no doubt.  Whether it can be sustained will be the challenge.  Since the mid-2016 slump, the team has risen to No.3 on the ICC Test rankings.  If they’re still there (or higher) by March 2018, they could go down in history as one of South Africa’s best Test teams ever.