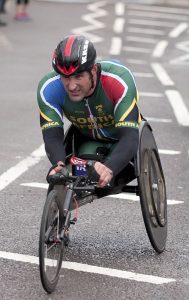 Van Dyk has been an elite competitor for 24 years – an unparalleled achievement in longevity at the highest level.

If you add the number of miles wheelchair athlete and handcyclist Ernst van Dyk covers in a year, it’s second only to the distance he has to fly to get to the starting lines of all the events around the world in which he competes.  And he’s done that every year for more than 20 years!

This fact alone is an incredible achievement.  It speaks volumes for Van Dyk’s dedication, determination and professionalism to be the best in his sport.  Except for an international handcycling event in Pietermaritzburg now into its second year, no major handcycling events or wheelchair marathons have been staged in South Africa during Van Dyk’s career.  Yet, he has always used South Africa as his home base.

Ernst was born with a congenital defect which resulted in the incomplete development of his legs and right arm.  “This child will suffer from a lack of quality of life due to his disability”, the doctor told his parents.  “You should put him up for adoption.”  Van Dyk’s parents ignored his advice and raised him like a normal child.  They soon noticed his affinity for sports.  Despite his disability they encouraged him to participate in whatever he fancied – gymnastics, table tennis, athletics, swimming.  He even played rugby until the other boys starting complaining that his wooden legs were too hard to tackle!

Initially Van Dyk preferred swimming and at the Barcelona Paralympics in 1992, at the age of 19, he finished fifth in the final of his event.  However, he also qualified for the semi-finals in one of the wheelchair events.  This track appearance turned out to be pivotal in Van Dyk’s career:  The cheer of the crowd as he circled the track prompted him to quit swimming and concentrate solely on wheelchair athletics (and later handcycling).

Since then Van Dyk hasn’t looked back and has established himself as one of the all-time great wheelchair athletes and handcyclists.  His consistent achievements were recognised in 2006 when he received a Laureus Award (the Oscars of sport) for the best disabled athlete in the world across all the disabled sport disciplines.  At the 2008 Beijing Paralympics, Van Dyk won his first gold medal in handcycling.  He followed this up with silver in London in 2012.  In 2014, Van Dyk won his tenth Boston Marathon – a record number of titles across all divisions at the world’s oldest, most prestigious marathon.

Van Dyk has been an elite competitor for 24 years – an unparalleled achievement in longevity at the highest level and a testament to his mental strength.  On a pure count of international titles won, Van Dyk is probably the second most successful South African sportsman or –woman ever after Gary Player.  A true ambassador for our country.

At the age of 43, Van Dyk believes he has at least five years of active competition in him.  He still regularly finishes in the top five at all the major marathons and handcycling events, so why not.  To the uninformed this might sound farfetched but it’s not.  Van Dyk and his competitors do not have the same impact on their joints as able-bodied athletes would experience.  As a result, Van Dyk’s chief antagonists are all old dogs – the likes of Alex Zanardi (Italy) 49, Kurt Fearnley (Australia) 35, Marcel Hug (Switzerland) 30 & David Weir (Great Britain) 37.

When Van Dyk considers the difficult day of his birth, he sees it as a second chance at life.  Things could have been so different…  The doctor said he would have no quality of life.  Van Dyk instead uses these words to fuel the flame of victory inside him.

Next week Van Dyk departs our shores for a seventh straight Paralympic Games.  He more than deserves all the support he can get from each and every South African.