The Future of Live Sport 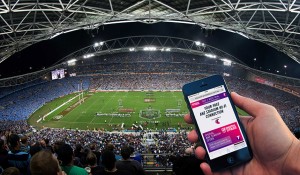 Imagine walking into a stadium and your smartphone immediately pings you that a R100 premium seat upgrade is available for purchase on your mobile device.  You grab the chance and settle in to enjoy that better-than-expected view of the game.  Next you use your smartphone to order a boerewors roll and an imported beer (just to spoil yourself!) – delivered right to your seat.  When your favourite player scores a try, you use your team’s in-stadium app to watch an instant replay at multiple angles and an exclusive video feed of his teammates’ celebrations on the touchline.  Later on, when that imported beer has made nature call, the same in-stadium app directs you to the closest restroom with the shortest queue.

Sounds too good to be true..?  Not at all.  Welcome to the connected stadium!  In the last five years, more than 200 of them have been established across the globe.

There are three reasons why teams and venue owners are pushing towards the connected stadium:

Whether by building from scratch (like the San Francisco 49ers did last year, vacating their iconic Candlestick Park for the high-tech Levi’s Stadium 65 kilometres away) or retrofitting existing facilities (like Manchester City recently did at their Etihad Stadium), stadiums are in a rush to become connected.

Generational shifts are happening at stadiums as the old fans are being replaced by younger, tech-savvy fans.  For this fan, the internet is as important as air, water, food and shelter.  The new fans take connectivity for granted.  The internet is where they share their experiences with family and friends.  Teams have come to realise that if they are not engaging the young fans, there will be nobody to replace the old fans.

Secondly, teams have faced the reality that it’s cheaper and easier for a fan to watch the big game at home.  So the teams have to make it more appealing than ever before to lure fans to the stadium.  A recent study by Cisco, one of the world’s leading companies in the design and manufacturing of networking systems and equipment, showed that 57% of fans prefer to watch the game at home.

From 2011 to 2014, the Super Bowl finals in America were all played at connected stadiums.  The international telecommunications company AT&T monitored social media posts from fans at the games and found that it grew by a staggering 252% over the four finals.

The third big reason stadiums are becoming connected is because it can make more money through additional purchases, from food and drink to team replica kits and seat upgrades.  From in-stadium data collection on fans, venues can make even more money by zooming in on items that the fans will buy.

Teams have a plethora of different sponsors.  Connected stadiums offer them a wonderful opportunity to be part of the action with their target market and, well, connect with them.  As sponsorships move more and more away from a branding exercise to a fan experience, the fan and sponsor all become supporters of the team.

Whether the connected stadium is good or bad for everyone at the game would probably be debatable from certain quarters.  For now it appears to be the way things are and are going to be for some time.