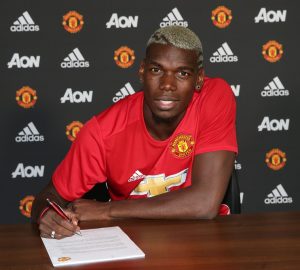 Pogba will earn approximately £11,2 million per year over 5 years. Had the deal failed, Pogba would therefore have lost close to £50 million! (Photo by John Peters/Man Utd via Getty Images)

In the relationship between an athlete (in the broad sense of the word) and his agent, there exists an immutable legal obligation (definitely in South African law but probably in all jurisdictions around the world) on the agent to always act in the best interest of the athlete.  From a contractual point of view this basically means the deal should be structured in such a way that the athlete derives the maximum financial benefit from the contract, regardless of what the benefit (if any) is for the agent.

It was therefore very interesting to read recent media reports regarding the role of the agent of the French football player Paul Pogba in his transfer from Juventus in Italy to Manchester United in England.  After a protracted transfer saga the deal was eventually sealed for a world record transfer fee of £89 million plus agent’s fees.

The agent is one Mino Raiola and the fee is reported to be 20% of the transfer fee.  Manchester United has to pay the fee directly to Raiola, making the total cost of the Pogba deal swell to a mindboggling £106.8 million!  Media reports were also unanimous that it was Raiola’s fee that stalled the transfer for weeks.  In the current transfer window, Raiola has now negotiated deals worth more than €300 million.  The Italian media has dubbed him “Mister 300 Million”.

Raiola is obviously at liberty to charge his clients whatever fee he wants to.  And if he’s clients are willing to agree to those terms, no problem.  But how does the agent make sure he receives payment of his fee?  There are many honourable ways to achieve this; the way Manchester United and Raiola did it, however, is not one of them.

Whilst pleased with the capture of Pogba, legendary Manchester United manager, Sir Alex Ferguson, was highly critical of Raiola’s role:  “There are one or two football agents I simply do not like – and Mino Raiola is one of them.”  Raiola retorted by saying:  “I only put Pogba’s interests first.”

Quite frankly, one fails to see how stalling a transfer for weeks to secure your personal fee can be regarded as being in the athlete’s best interest.  No, Raiola very cunningly exploited the situation for his personal benefit.  Fuelled by an egotistical new manager, Jose Mourinho, who wanted to prove to the fans he can attract the biggest names to Old Trafford, coupled with Juventus playing hardball, Manchester United very quickly painted themselves into a corner.  To save face they had to get Pogba, come hell or high water.  That was the opportunity Raiola so brilliantly seized.

However, all is not always well that ends well.  Raiola and Manchester United have created a very dangerous precedent.  Purely for personal gain Raiola played the odds and it paid off?  But what if it didn’t..?

According to media reports Pogba will earn approximately £11,2 million per year over five years.  That is almost five times as much as he would’ve earned at Juventus.  Had the deal failed, Pogba would therefore have lost close to £50 million.  Talk about a calculated gamble!

In the aftermath of the Pogba transfer it doesn’t take an Einstein to figure out that other agents, with equally high profile clients, will similarly try their luck.  The premise of such an approach, however, is fundamentally and morally wrong and legally flawed simply because the agent is no longer acting in the best interest of the athlete.  Whether one can legislate against such an approach is debatable; you cannot outlaw unscrupulous agents.  It would appear that, unfortunately, one will have to wait for a mega-transfer deal to go awry because of an agent’s fee before sanity will prevail again.