The art of batting and T20 cricket 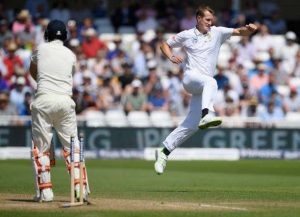 Is T20 cricket having a negative influence on batting in Test cricket?

The Proteas’ drubbing of England in the second Test Match at Trent Bridge in Nottingham was absolutely remarkable.  On 9 July their heads hung in shame at Lord’s after a 211-rum thrashing at the hands of new captain Joe Root’s England side.  Eight days later, the shoe was on the other foot and England received an even bigger hiding at Trent Bridge – by 340 runs.

England’s performance was roundly criticised by all and sundry.  The back page of the Daily Mail the following day screamed “You Shockers!”  Former international players like Nasser Hussain, Ian Botham and David Lloyd harshly criticised England’s batsmen in particular.  Michael Vaughan even got involved in a war of words with Root.  According to Vaughan the way England had batted showed “a lack of respect about what the Test game is,” to which Root responded: “I think that’s very unfair. To be honest, I can’t believe he said that.”

The facts, however, support Vaughan more than Root and England’s cavalier batting throughout the Trent Bridge Test match is hard to comprehend.  Over two innings Root’s team occupied the crease for fewer overs (96.1) than South Africa managed in each of theirs (96.2 and 104 respectively).  But before the Proteas get too smug, lest not forget that their second innings effort at Lord’s was also unspectacular – 119 runs off 36.4 overs.  In short, so far in this Test series three out of eight innings have not been what you would expect from the No.2 and 4 ranked Test teams.

The duty of a batsman, whether in Test of third league club cricket, is to score runs.  He can only do this if he occupies the crease and protects his wicket.  However, it would appear as if somewhere along the line T20 cricket and the (often ill-applied) notion of “positive cricket” has killed the concept of preserving your wicket.  Because T20 cricket is shoved down the throats of players at U.13 level already, learning the art and patience required to build an innings for anything longer than 20 overs are lost.  The proof of this was startlingly illustrated by many of England’s batsmen at Trent Bridge – brief innings that lit up the Test match a la T20-style before Philander & co. snuffed them out.

For the sake of commercial success, T20 cricket is important.  But T20 batting is a myth, an illusion if you like, because a batsman’s wicket doesn’t matter much.  Once the T20 mind-set starts spilling over into the Test arena (like it has in this series) the warning lights start flashing bright red.  More than showing T20 cricket is not the only show in town, the cricket administrators must ensure it is not the most important show in town.  Test cricket is.  The foundation of cricket is the longest form. Upon that foundation is built everything else. T20 cricket has distracted players from this simple fact.

The good thing about the Proteas’ performance at Trent Bridge is that it blew new life in the series.  Had there been a repeat of the Lord’s debacle, the whole tour could have degenerated into a damp squib.  As it is, the final two Test matches (at the Oval from 27 July and Old Trafford starting on 4 August) will now be fascinating affairs.  History beckons for the Proteas…