Test cricket in for major overhaul 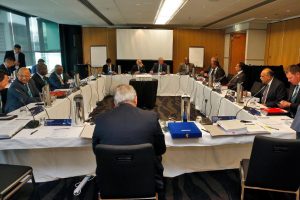 The ICC will consider major changes to the playing structure of Test cricket from 2019 onwards.

The International Cricket Council (ICC) have given notice that at their next Board meeting in June 2018 they will consider major changes to the playing structure of Test cricket from 2019 onwards. There is no doubt that Test cricket needs change if it is going to survive in the modern-day cricketing world.

The ICC intends to divide Test cricket into two divisions of six teams each resulting in strength versus strength system. This is an important decision for the future of Test cricket, as all the Test playing nations are not of the same level of strength. With the current system certain Test series are sub-standard and attract little or no interest.

Also, it will prevent the problem that some of the major Test-playing nations like India do not play the other Test nations on a regular basis because of commercial interests. This was the major shortcoming of what was called the “Future Tours Programme”, which has now been scrapped. The new system will give Test cricket a structure that currently does not exist.

The second major decision is to create a Test League with a final every four years to give Test cricket context. This is a good idea, but it will be interesting to see how the mechanics of such a league work. The nature of Test cricket does not lend itself to a tournament style format.

The one area where there is concern is the growing support for four-day Test cricket. This is an ill thought out concept and could ruin Test cricket with the danger of too many drawn matches. The fifth day is the insurance against bad weather and pitches that go flat because of high temperatures, and nothing else. Also, four-day Tests will radically and negatively change the flagship Test series, the Ashes. The ICC should not entertain this ill-conceived idea.

Both strategic changes, if approved by the ICC Board, will bring a new, fresh look to Test cricket in the modern era and enable it to hold its own against the white-ball game.