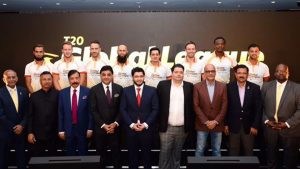 After weeks of speculation, Cricket South Africa (CSA) on Monday this week finally announced the owners of the eight franchise teams for the inaugural T20 Global League (already assuming the abbreviated moniker T20GL in media reports).  It signified a momentous step forward in establishing CSA’s own global T20 event.

At a glitzy event at London’s posh Bulgari Hotel (it is a little baffling that an announcement of this magnitude should be made in England and not South Africa), the bases for the franchises and their respective South African marquee players were also announced.

The significant features of the team ownerships are an expansion of current Indian Premier League (IPL) and Pakistan Super League (PSL) franchises and the minority of South African owners.

The franchises based in Port Elizabeth and Bloemfontein will also be in foreign hands.  The Dubai-based Channel 2 Group, led by chairman Ajay Sethi, bought the Port Elizabeth team.  According to Mr Sethi the team will train in Dubai in preparation for the T20GL.

City Sports, based in Hong Kong, snapped up the Bloemfontein franchise.  The company’s owner, Sushil Kumar, admitted to the media that he has never visited the city but decided to pick the City of Roses because “it would be a cultural experience and we’re keen to learn much about the city.”  They better start learning how to braai then!

As far as could be established, the T20GL is first foray into domestic T20 cricket for both the Channel 2 Group and City Sports.

The only South African team owners will be based in Pretoria and Stellenbosch.  The Pretoria franchise was bought by a South African consortium headed up by local businessman Osman Osman.  Mr Osman is the managing director of BluBlood, a Pretoria promotions and talent buying company.  Asked why Pretoria, Mr Osman was straightforward:  “That’s where we actually live. Pretoria has always been home and we’re really passionate about cricket. It made sense given that we’re a local company there.”

The Stellenbosch franchise will be in the hands of Brimstone Investment Corporation, a Cape Town- based investment company.  The company has majority interests in well-known South African companies like Sea Harvest and Lion of Africa.  It is a company with strong roots in the Western Cape, and the Stellenbosch acquisition makes sense from this point of view.  (It is curious though that the team is called “Stellenbosch” but their home ground will be Boland Park in Paarl.)

Potchefstroom, East London and Kimberley were also considered as venues.

The franchises will have the opportunity to put their squads together at the draft on 19 August.  According to CSA interest had been received from around 400 players, with a “160-odd” from outside the country.  They will be whittled down to 136 places spread across the eight franchises, with four overseas players per franchise.

The T20GL will start early in November and culminate in the final on 16 December.