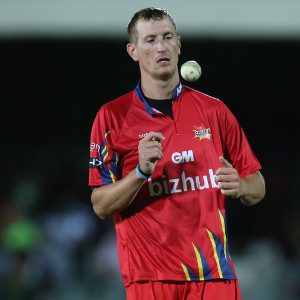 Chris Morris is the new world record-holder for the most economical bowling figures in T20 cricket.

The Lions fast bowler bowled three maidens in his four over stint with the ball, recording figures of 2/2 and making a huge contribution to his team’s comprehensive 47 runs victory over the Cobras in their Ram Slam T20 Challenge match at the Wanderers on Friday.

Pakistanis  Zulfiqar Babar and Shoaib Malik and West Indian off-spinner Sunil Narine were the three bowlers to lose their record, having all conceded three runs in a four-over spell in the format.

In their previous match in the competition against the Knights – where the Lions ended up winning after a super-over on Sunday – Morris was the most expensive bowler in the Lions attack conceding 50 runs in his four overs.  Two days before that match, Morris went for 37 without taking a wicket in his four overs against the Warriors, where his side won by 10 wickets.

The 27-year-old speedster said he put in some hard-yards following those performances and had been rewarded:  “It’s been a tough couple of weeks personally because I’ve been going for quite a few runs.  I worked quite hard this week bowling a lot at the indoor nets, and did a lot of target bowling with our bowling coach Gordon Parsons.”

Last season the Lions finished bottom of the log in all three domestic competitions and despite making it a perfect four wins from four in the competition this season, Morris said the Lions would keep their feet on the ground:  “Every win is important, especially after the season we had last season. We’re not taking anyone or anything for granted.”