Spotlight on the “spirit of the game” (again!) 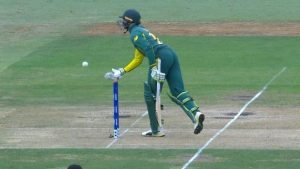 What does the spirit of cricket mean?

The West Indies U.19 team has caused quite a stir in the cricket world with their successful, albeit controversial, appeal for ‘obstructing the field’ against South African batsman Jiveshan Pillay in their U.19 World Cup clash in Tauranga, New Zealand earlier this week.

Pillay was dismissed after picking up and throwing the motionless ball, which he had inside-edged onto his pad, to West Indies wicketkeeper and captain Emmanuel Stewart, who then appealed.  The umpires convened to discuss the appeal and sent the decision to the third umpire, who then made the final decision.

The Marylebone Cricket Club (MCC), custodian of cricket’s laws, state in the first paragraph in the Preamble to the Laws of Cricket that the game “should be played not only according to the Laws, but also within the Spirit of Cricket.  The major responsibility for ensuring fair play rests with the captains, but extends to all players (and) umpires…”

Law 37.4, under the heading ‘Returning the ball to a fielder’, states: “Either batsman is out obstructing the field if, at any time while the ball is in play and, without the consent of a fielder, he/she uses the bat or any part of his/her person to return the ball to any fielder.”

According to the letter of the law, Pillay was therefore out.  But is it as straightforward as that?  As is evident from the video clip, he was clearly not looking to try and gain an advantage – he was doing something that regularly happens at all levels of cricket all over the world.  So was Stewart’s appeal in the spirit of the game?  Should the umpires follow the laws to the letter, or use their discretion in such situations to uphold the spirit of the game?  Stewart has since publically regretted his decision.

However, what has been notable is the public reaction on Twitter and other social media from some prominent cricket people.

Those taking a dim view of the dismissal include former England captain Michael Vaughan who called it “a disgraceful way to claim a wicket”.  Former South African opening batsman Herschelle Gibbs said it was a “shocking decision” and Australian legend Dean Jones asked in one of his tweets “where is the spirit of the game code gone?”

Less forgiving in their opinions were the likes of former Australian fast bowler Mitchell Johnson and New Zealand batting coach Craig McMillan.  Johnson, a bit sarcastically, wrote on his Twitter account:  “Follow the rules, that’s the spirit of the game right?”  McMillan had a much simpler view:  “Batsman bat, bowlers bowl and please leave the ball to be picked up by the fielders.”

The spirit of the game is an undefinable, esoteric concept.  What it means is sure to differ for a South African from a West Indian from any cricketer from any other cricket-playing country.  So where does this incident of obstructing the field fit into the spirit of the game?

Despite all the huffing and puffing, Stewart was completely within his right to appeal for the wicket. The umpires simply followed the laws in giving the batsman out.  Therefore the problem lies with the law and its application.  Surely it cannot be difficult to amend the law to allow for “a friendly way of throwing the ball back”.  If the batsman was not trying to gain an advantage in doing what he did, then he shouldn’t be given out.  Otherwise, keep the law as it is but give the umpires some discretion.  If the umpires had a discretion in Pillay’s case, they surely would not have given him out.

The number of players past and present who commented on the incident shows just how strongly views are on the topic and how the spirit of the game is open to interpretation.