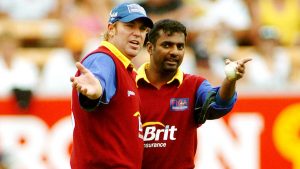 Warne and Muralitharan, the best spin bowlers in the history of international cricket.

There was a time during the decades from the 60’s to the 80’s when it was believed that spin bowling had no future in cricket. The game was based around fast and medium pace bowlers, with spinners only being used occasionally for a change of pace or to bowl while the fast bowlers were being rested.

This all changed with the arrival of Shane Warne and Muttiah Muralitharan, who between them took 2,348 international wickets. They were strike bowlers and won matches for their countries. They were the best spin bowlers in the history of international cricket. They not only saved the art of spin bowling, but showed what a force quality spin could be in world cricket in all forms of the game.

The arrival of T20 cricket further enhanced spin bowling as almost all teams play with at least two spinners. The same policy now applies to ODIs and 50 overs cricket. Some teams even play with three spinners, one of whom can bat, and bowl between 20 and 25 overs of spin depending on the conditions and the opposition.

Spinners are used to control the middle overs of matches, even if the wicket is not turning, by taking the pace off the ball. The wrist spinners are especially important because they are wicket-takers and the off-spinners because they control their lines better than left-arm spinners.

South Africa has a very poor record against spin bowling and it has once again showed in the current Cricket World Cup (CWC). In the three completed matches to date, the spinners have played a big role in their defeats. Especially against India and Bangladesh, their spinners squeezed South Africa. England also successfully bowled two spinners at the Proteas.

If South Africa wants to compete in future International Cricket Council’s tournaments, they will have to improve their ability to play spin and develop quality spin bowlers. Importantly, South Africa will need to change its attitude to spin bowling and see it as an asset, not a necessary evil.

In the current CWC there are five nations from the sub-continent and they all have quality spinners in their attacks. This will not change with the growth and development of the game on the sub-continent.

South African cricket will need to adapt or die against spin.