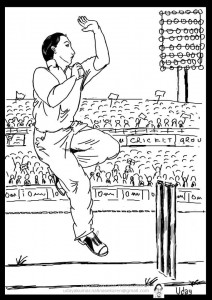 The succession of the spearheads might be closer than we think.

It is a simple fact of cricket – regardless of the format – that the team taking the most wickets (20 in first class cricket and 10 in limited overs cricket) generally wins the game.  And 99% of the time you can only achieve this if your bowling attack includes at least three top fast bowlers.

From 2011 – 2015 the Proteas were a dominant force in world cricket across all three formats in no small part because they had three of the best fast bowlers around:  Dale Steyn, Vernon Philander and Morné Morkel.  However, all three are over 30 and at the moment do not feature at all in an ODI tri-series in the Caribbean (also involving Australia).  Morkel is there but has been warming the bench through all the Proteas’ four matches to date.  Steyn has barely played for a year (mainly because of injury).  But instead of playing in the Caribbean he is being nursed back into action on a contract of seven matches for Glamorgan in the English NatWest T20 Blast.  Since picking up a bad ankle injury in India in December, Philander has only played three first class matches.

The succession of the spearheads might therefore be closer than we think.  So, how are the pretenders faring and what does South Africa have in the cabinet?

In the current Caribbean tri-series all three teams have played four matches to date, with each winning two and losing two.  The Proteas have so far employed four pacemen:  Kagiso Rabada, Kyle Abbott, Wayne Parnell and Chris Morris.  They have been the most ineffective pace attack of the three teams.  The Proteas quicks have taken 9 out of a total of 32 wickets (i.e. about 28%); the same numbers for the Australian and West Indian quicks are 16 out of 35 (45%) and 15 out of 25 (60%) respectively.  It is a continuation of the fast-bowling woes that beset the team in the 2015/16 Test series against England and at the World T20 in India in March.

Rabada has already shown he will be a worthy successor.  Abbott and Parnell have national contracts; Morris does not.  Yet, Morris has by far been the better bowler of the three.  Don’t tell me the succession planning has gone awry already!

Based on the ‘A’ team selections we have to believe that, after the seven fast bowlers mentioned above, the CSA selectors see the following pacemen (in no particular order) as the next best in South Africa:  Sisanda Magala, Duanne Olivier, Andile Phehlukwayo, Dwaine Pretorius, Hardus Viljoen, Marchant de Lange and Malusi Siboto.  Honestly, I don’t believe anyone of them will give a top six batsman from Australia or India (forget Zimbabwe) any sleepless nights.

At the ‘A’ squads’ announcement the CSA selectors said the players were picked on merit, based on last season’s performances.  Sure, all seven “next best” fast bowlers performed well but that has to be viewed against the backdrop of an increasingly weaker domestic standard.  They will meet their comeuppance Down Under.

With only Rabada and Morris showing glimmers of hope, it is at this point difficult to see how the Proteas will take the required number of wickets to consistently win matches once Steyn and co. are no longer there.