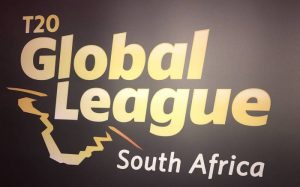 Cricket South Africa (CSA) yesterday announced that “T20 Global League” will be the name of the new South African T20 tournament and the logo was also unveiled to the media. CSA has now taken another big step towards making the long-awaited tournament a reality.

The new franchise owners of the eight teams will be announced at Lord’s on 19 June after the ICC Champions Trophy. There is speculation that no South African company is interested in buying a franchise or can afford one. If this is true, it will be disappointing that a high profile South African tournament will be owned by foreigners only.

The overseas and local marquee players will also be announced with the franchise owners at Lord’s. During August a player draft will be held for the franchises to secure the rest of their playing squads. There is a lot of excitement and interest from not only South African cricketers, but also foreign players and coaches.

The whole project is a highly ambitious one for a country like South Africa with its middle size economy and in a country where cricket is very much a second sport behind football and rugby. There is a saying that supporters do not spend money on their second sports.

If the tournament is to be successful financially, CSA will need to commercialise the whole project offshore in dollars. The television partner, event sponsor, team sponsors and advertisers will need dollar contracts to finance this global event and eventually make it profitable.

This tournament is important for the profile of South African cricket, the loyal fans and the players. It needs to happen and be successful. If the tournament is not profitable in year one then CSA needs to bankroll it to get it off the ground. CSA is by far the most cash flush of all sporting bodies in South Africa and can afford to do this.

The Government could be another option and should support CSA in a bold but important venture that will benefit the country financially and profile it across the world.