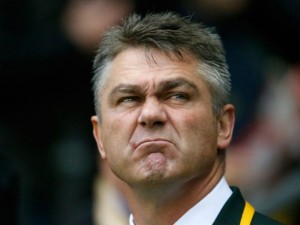 The Springbok team for the 2015 Rugby World Cup will be announced today. The South African Rugby Union has announced that the team will be picked on merit and there will be no quotas. This will be music to the ears of the real rugby supporters from all population groups.

Recently the Western Cape branch of Cosatu, through their secretary Tony Ehrenreich, accused Bok coach Heyneke Meyer of excluding black players on purpose. He said that three black and two white unhappy Springboks had approached Cosatu to intervene. When asked to identify these players he refused to do so and the black Springboks in the squad were surprised to hear about this development. It is clear that this was again vintage fabrication in true Ehrenreich style.

Also, former Springbok coach Peter de Villiers attended a ceremony where the Springbok jersey was burned. These sorts of actions are undermining South African sport and creating the wrong environment for them to perform on the global stage. They do nothing for the image of the country or nation building but are merely destructive.

The two teams that are mainly attacked by politicians and politically motivated people for their own gain are the Springboks and Proteas. However, these are the only two national teams who have credibility on the global stage because of their world-class performances. They keep South Africa profiled in the world media for the right reasons. They certainly don’t deserve to be attacked by politicians and politically motivated South Africans.

Both teams have transformed when one compares the current personnel to years gone by. Especially, the Proteas have become a truly South African team with regards to representativeness. To use the country’s demographics as a measurement for representation makes no sense. The criteria can only be the number of people playing a particular code, the passion that they have for the code, and the code’s culture and history that they have been exposed to.

If South African sport is not unified and supported by all South Africans it will slowly deteriorate and eventually die a slow death. A good example of this is Zimbabwe cricket that has regressed both on the field of play and commercially. It is the duty of all South Africans, including the politicians, to support the national teams unconditionally. The government must also create a healthy environment for sport by insisting on merit selection, fair opportunity and supporting all the codes financially, especially with facilities and development.

South Africans as a nation are passionate about sport and the country has a good history, produces great athletes and has the weather to be a true international competitor. However, we need to rid ourselves of racial pettiness and nepotism, and have a global vision if South Africa is to reach its full sport potential. South African sport can only remain competitive on the field and commercially if transformation is based on merit and equal opportunities.

Let’s not be critical if the Springboks are too white or Bafana Bafana too black. We are all South Africans, in spite of a difficult past, and let’s get behind our national teams and athletes.