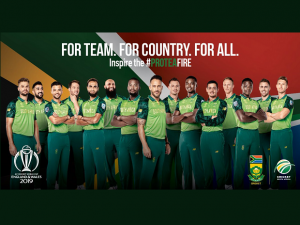 The selectors have announced their fifteen man squad for the 2019 Cricket World Cup (CWC) that takes place in England and Wales from 30 May to 16 July. The Proteas play the opening match against the hosts at the Oval.

There were no surprises when the squad was announced based on what the selectors had picked during the ODI series against Pakistan and Sri Lanka.

There are three world-class players in the squad in Kagiso Rabada, Quinton de Kock and Imran Tahir. The competitiveness of the Proteas will depend heavily on what sort of CWC these three players have, especially De Kock, because batting holds the key to ODI victories. But there has to be certain concerns around the squad with regard to age, quality and injuries.

The Proteas have a few players that are on the old side for a CWC: Hashim Amla (36), Imran Tahir (40), Dale Steyn (36) and Faf du Plessis (35). Especially Amla is a concern. Even for the great player he is, it looks like his time is up and runs have been hard to come by in recent times. His catching and throwing have also become a problem and he is looking an old player on the field.

Steyn must be a concern after the recent injuries and returning from the Indian Premier League after only two matches. Lungi Ngidi and Anrich Nortje are also not fully fit at the moment.

The batting will be a big concern. Faf du Plessis, David Miller and JP Duminy have been to CWC’s in the past and the Proteas have failed to deliver because of the batting. Aiden Markram and Rassie van der Dussen are the two batsmen who have not previously played at a CWC. Van der Dussen has had a fantastic first international season and it will be interesting to see if he can continue at this level with the intensity and pressure that a CWC brings. Markram already has a good international career at Test level but is vulnerable to quality spin bowling. His ODI series against India at the beginning of 2018 was poor, as was his tour of Sri Lanka later last year. The jury is still out on him at ODI level, especially where the spinners play a big part and there are five sub-continent teams participating in this CWC. He only made the CWC squad ahead of Reeza Hendricks based on brilliant performances against mediocre franchise attacks in the Momentum Cup.

The biggest problem is going to be the quality of the two all- rounders who will need to play a big role in the team. They certainly are not the same quality of a Shaun Pollock or Lance Klusener of years gone by. The performances against Pakistan and Sri Lanka highlighted the lack of balance in the team because of the lack of a quality all-rounder or two.

The real strength of the team is the quality of fast bowling – if they are all fit. However, CWC’s are won on batting and not bowling. England will be no different with their flat wickets.

Since 1992, this is probably the weakest team that South Africa has sent to a CWC and it is hard to see the Proteas seriously competing for this World Cup.