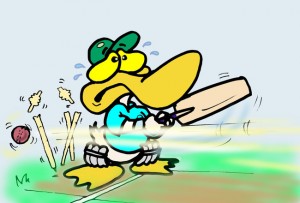 South Africa is in for a bumpy ride in Test cricket.

The Proteas’ decline as a Test team is now a fact! The International Cricket Council (ICC) released their official rankings earlier this week. Having been No.1 in January, South Africa have crashed to sixth place.

In other words, the only Test teams considered worse than South Africa are Sri Lanka, the West Indies and Bangladesh. Think about that one for a moment… Even though the Proteas may have simultaneously climbed to No.3 and 4 in ODI’s and T20I’s respectively, that doesn’t count for much. White-ball cricket is only important around global events. Everyone knows Test cricket is the real McCoy.

The retirement of Mark Boucher, Jacques Kallis and Graeme Smith in quick succession was always going to leave a hole difficult to plug. Under normal circumstances one will accept a slump of a year or two. Blooding new players, finding a new balance in the team (especially in the absence of Kallis) and getting the new leadership to settle in require patience. All teams have to go through that generational change.

But South African cricket doesn’t operate under normal circumstances. Smith & co.’s departure is only part of the reason for the decline. It is no coincidence that the decline has corresponded with an alarming drop in the standard of first-class cricket. Add to that a plethora of other issues – interference in team selections, strange selections (Hardus Viljoen?), poor execution of transformation policies, increased quotas at all levels, very disappointing crowds, the list just goes on – and it doesn’t become too far-fetched to predict a looming crisis.

According to recent media reports, both Linda Zondi, national selection convenor, and Corrie van Zyl, CSA’s general manager of cricket, appear to be of the opinion that the decline is a short-term issue. I couldn’t disagree with them more.

The three fast bowlers who got the Proteas to No.1 are all over 30. In two years, Dale Steyn (33 next month), Morné Morkel (31) and Vernon Philander (31 next month) could also be gone. AB de Villiers (32), Hashim Amla (33), JP Duminy (32) and Faf du Plessis (almost 32) are no spring chickens either. Plenty of gaps in the former No.1 Test team are going to have to be filled very soon. Quinton de Kock and Kagiso Rabada are two worthy replacements, but one cannot see where the others will be coming from.

The increased quotas have directly contributed to the drop in the standard of first-class cricket. Granted, it was an issue that needed urgent attention but unfortunately, from an international playing point of view, it couldn’t have come at a worse time for South African cricket. How will the selectors be able to identify capable (or even potentially capable) replacements for all the stalwarts mentioned above if our franchise cricket is so weak?

We’re in for a bumpy ride in Test cricket much longer than Messrs. Zondi and Van Zyl think. It could even go the way of West Indian cricket post-80’s. Let’s hope not.