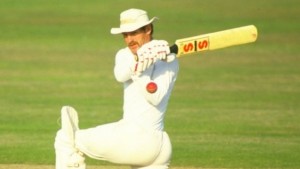 Rice was a fierce and fearless competitor who led from the front with a never say die attitude.

South African cricket is mourning the death of the cricketing legend Clive Rice. His career coincided almost to the day with South Africa’s isolation from international cricket. He was picked for the Australian tour of 1971/ 72 that was cancelled and captained South Africa on the first tour of India after isolation in 1992 at the age of 43.

Rice only played in three One Day International matches for South Africa and belongs to a lost generation of South African cricketers because of politics. His career consisted of playing mainly domestic cricket for Transvaal and Nottinghamshire, which he both led with great success. Transvaal became known as the” Mean Machine” as they totally dominated South African provincial cricket by winning the Currie Cup, Nissan Shield and Benson & Hedges night series almost at will.

In county cricket Rice lead Nottinghamshire to two county Championship titles after 52 years when they won the first title in 1981 and the second in 1987. He formed a formidable combination with the great New Zealand all-rounder Richard Hadlee and they dominated the performances of the Nottinghamshire team. Between them, they scored 2207 runs and took 170 wickets during the successful Championship campaign of 1981

Rice was also a standout player in the Kerry Packer World Series in the late 1970’s and played in 18 unofficial Test matches for South Africa during the rebel era. He made a big contribution towards the professionalization of the game of cricket as we know it today.

If Rice had played international cricket he would have been at least as good, if not better, than the many great all-rounders of that era like Ian Botham, Kapil Dev, Imran Khan and Richard Hadlee. He won three single wicket competitions in the United Kingdom and Hong Kong against these all-rounders proving this. In fact Rice would probably rate in the top ten all-rounders in the history of the game.

Rice was a fierce and fearless competitor who led from the front with a never say die attitude, as we saw when he bowled Rob Drummond with the last ball of a Currie Cup match at Newlands to secure victory for Transvaal. He was not only respected as a great cricketer and leader but also as a person, as we have seen with the reaction across the cricketing world with his untimely death.

Cricket has a lost a legend who will forever be remembered not only as a great player and leader but also as a great human being. Clive, thank you for the legacy you left the game and the memories. Rest in peace.