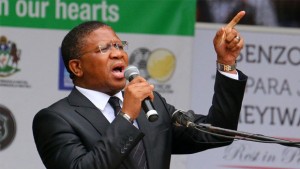 Cricket in South Africa faces an uncertain future after Sports Minister Fikile Mbalula suspended Cricket South Africa (CSA) (with three other Federations) from hosting any global events following the Eminent Persons Group report. Materially this does not affect CSA as no global tournaments are scheduled to be held in this country for the rest of the decade and beyond.

The concern is that it is the first time that we have seen the government intervene and impose sanctions on South African sport. Personally, I find it difficult to understand the rationale that a government can impose sanctions on its own sports bodies and people in a free and democratic society. Mbalula has stated that he chose this route so that the athletes would not be affected. But what about the South African sports fans who will be the real losers?

The concern is that a precedent has been created and that if the government is not satisfied with future transformation performances, they will take further action against sports Federations. Logically, the next step could be to ban the national team from playing international cricket. Or CSA will bow to political pressure and select teams that will satisfy the aggressive racial transformation ideals of the government at all costs.

Also, further government interference in cricket could see South Africa being banned by the International Cricket Council (ICC), like they have just done with the Nepal Cricket Association. The ICC constitution does not tolerate government interference in the running of cricket of their members. All three scenarios will lead to commercial ruin for CSA and the collapse of cricket in the country.

Every level-headed South African buys into transformation and accepts that all South Africans must be given the opportunity to play professional and international cricket. However, at the top level, being professional and international cricket, this can only be achieved on merit and not quotas. Using reasonable and fair quotas at provincial and age-group levels is positive to give disadvantaged cricketers an opportunity to aspire to higher honours taking into consideration South Africa’s history.

All South Africans are singing off the same hymn sheet but there is disagreement and confusion on the methodology. It is important to remember that cricket is an international and professional sport and not just another means of social upliftment. Therefore, it is important at what level merit and quotas are implemented in a South African context to retain the required standards demanded by the international game.

It is also important for sanity to prevail and not see a return to 1970 by the imposing of sanctions by the government on its own Federations, players and people. Cricket survived the previous international sanctions for twenty years because it was an amateur game but it won’t survive sanctions in the professional era.