South Africa: Searching for a place in history 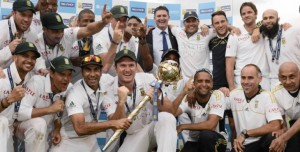 Will history remember the time the Proteas ruled?

Cricket is a statistician’s dream come true. Most of it is obscure but some statistics are as legendary as the game itself.  The more familiar and noteworthy of these are within the realm of general cricket knowledge of the ordinary fans.

Ask a cricket follower what 99.94 means and he’ll instantly tell you it’s Donald Bradman’s test average. Or ask him how who has taken the most wickets in the history of test cricket and the chances are he’ll say either Muttiah Muralitharan or Shane Warne.  (The former took 800, the latter 708.)

Ask the same fan who the standout teams in the history of test cricket are and he’ll name at least one of the following: The West Indies from 1976 to the early 90’s, Australia during and just after Bradman’s career and Australia from about 1995 to 2007.

There is a fourth team with a comparable record over a sustained period of at least a decade. After them there is daylight before you get to, statistically, history’s fifth best test team.  At the moment, however, you wouldn’t dream of bracketing this fourth team together with the top three.

The fourth team is South Africa from 2006 to 2015. But why are they not (for now at least) mentioned in the same breath as the other three?

Firstly, the record shows that from December 2006, when South Africa beat India 2-1 at home, until December 2015, when India infamously beat South Africa 3-0 on sub-standard wickets, South Africa had either won or drawn a staggering 28 out 30 test series. Only the Aussies managed to beat them twice, in South Africa!  Exactly half of these series were away and South Africa was undefeated in all of them – the best away-record in the history of test cricket.

Secondly, South Africa won on all cricket continents. They twice defeated a No. 1-ranked team to become No.1 themselves.  Tellingly, they never lost a series on the Asian sub-continent.

Since the current test ranking system was introduced in June 2003, only four teams have held the No.1 position: Australia, England, India and South Africa.  One cannot see the No.1 ranked team coming from any other country than these four for the foreseeable future.  South Africa has held this position the second longest – a cumulative period of 42 months.

A cursory glance of media reports around the time each of the other three countries attained No.1 status shows that “a big thing” was made of it. England, who has had the shortest reign of the four, was especially talked up by their media in 2011.

In this company, South Africa was always perceived to be the poorer cousin. It became even poorer – both financially and in a figurative sense – after the Big Three (India, Australia and England) hijacked world cricket in 2014.  The Big Three never stop playing, mostly each other.  South Africa is left to live off their alms.  Their players think of themselves as world-famous cricketers, and of South Africans as good guys who can play decent cricket.  Their collective mind-set seems to determine the way the cricket world perceives a good or great team and, voila, in a matter of two months South Africa’s decade-long record has become just another statistic.

Hopefully cricket history will be kinder to the South African team from 2006 – 2015 and that their incredible feats will be remembered long after the cricket world has forgotten the dictatorship of the Big Three.