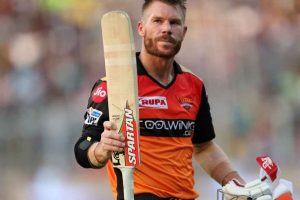 Is this the Warner that’s evolved over the last 365 days? (BCCI)

There has been something distinctly distasteful about the recent re-integration into the cricketing world of Steve Smith, David Warner and Cameron Bancroft.

The ‘sandpapergate’ saga is well-documented.  For the purposes of this article, suffice it to say that Smith and Warner were banned for twelve months, and Bancroft for nine.  The bans kicked in on 29 March 2018, meaning Bancroft could resume playing on 29 December 2018 and Smith and Warner today, 29 March 2019.

First, an aside.  The application of the bans was always irksome.  Especially Smith and Warner were always trying to bend the rules of the bans.  Astonishingly (or perhaps not..?), Cricket Australia (CA) sometimes relented, for example allowing the pair to play in last year’s inaugural Canadian Premier League.  At some stage there was even talk of Smith playing county cricket in 2018.  Even now, the pair was allowed to play in the 2019 Indian Premier League even though the start of the tournament was a few days shy of 29 March.  Was CA really serious about upholding their bans?

About two weeks ago, Smith and Warner were flown to the United Arab Emirates to hook up with their former teammates, who were preparing for a one-day series against Pakistan there.  These were some of the comments of the re-union as reported by Cricinfo:

What a mockery of the banning!  Smith and Warner are being portrayed as angels.  Nowhere have I recently seen either expressing any regret for what they’ve done.  Nope, it’s all about them again and them being back.  The long lost sons have returned!

Mark Taylor, the former Australian captain and former CA board director, recently said that a “grey area” remains about how long the national team was using illegal methods with which to alter the ball’s condition prior to ‘sandpapergate’:   “There was no probe into finding out how long it had been going on for.  Was this the first time?  There’s a line between ball management and ball tampering.  The grey area in all of this is how much of this ball management in the past was tampering and went unnoticed.”

Instead of taking seriously the comments of a respected cricket man like Taylor, Kevin Roberts, the CA chief executive, responded with the usual rhetoric:  “We could jump at shadows, we could react to innuendo. If facts come to light we’ll be addressing those, and if that means there’s issues for us in the short term because we do the right thing then so be it, because it’ll benefit the integrity and reputation of the sport that we love in the long term.”

The sincerity of CA’s treatment of ‘sandpapergate’ and its wider ramifications are, in my opinion, in serious doubt.

As for Bancroft, he still has a shot at redemption.  But what was English county Durham thinking when they appointed him captain for the 2019 season?  Firstly, his only previous captaincy experience was for Australia U.19 in two one-day games in 2011.  Secondly, according to Durham chief executive, Tim Bostock, Bancroft was appointed because he was “the best available option” after two experienced Durham players said they didn’t want the job.  The timing of it all and the lame duck reasons for doing so just stick in the gizzard.

On his return to the IPL, Warner scored a typical belligerent scintillating 85 off 53 balls for Sunrisers Hyderabad against Kolkata Knight Riders.  This is how Cricinfo reported his dismissal:  “David Warner is walking back to the dugout.   Fifteen short of a seventh T20 hundred, Warner has just sliced a catch to cover.  Under usual circumstances, Warner would likely be miffed at missing out on cracking triple-digits, such is his hunger for runs, but this time it’s different.  He walks back to his team-mates in a leisurely manner, soaking in the applause from the Kolkata crowd, a sense of satisfaction radiating from his face.  He raises his bat gently, takes the atmosphere in, and disappears into the changing room.  This is not the Warner we have known. This is the Warner that’s evolved over the last 365 days.”

I’m sorry, but I don’t believe the façade.  A leopard doesn’t change its spots.