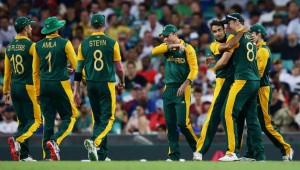 What must be done to make the Proteas competitive for the 2017 Champions Trophy and 2019 World Cup? © Getty Images

South Africa has once again failed to make an impact in an ICC global tournament when they failed to qualify for the semi-final stage of the World T20 in India.  The Proteas were in Group 1 which was by far the easier of the two groups.

Not having won a World Cup or World T20 has become untenable for a cricketing nation that has the history, infrastructure, support, finances and players to succeed. The Proteas historically perform well in bilateral ODI and T20 series, but when they play in ICC events failure has become too predictable. So what needs to be done to rectify the situation to make the Proteas competitive for the 2017 Champions Trophy and then the 2019 World Cup, both in England?

Cricket South Africa (CSA) needs to appoint a foreign coach with international experience and a good track record to replace Russell Domingo when his contract expires in 2017. There are no local franchise coaches who have international experience and the track record to move the Proteas forward to once again become a dominant world cricketing brand. A foreign coach will also break the hegemony that has developed within the team and its leadership.

CSA also needs to accept that the current leadership concept of having three captains, one for each format, is not working for the Proteas. They need to identify and develop a leader in the Graeme Smith or Hansie Cronje mould who takes charge of the Proteas team per se. The captain in cricket has a big role to play both on and off the field. The players, media, cricketing fraternity and fans need to have a leader that they can identify with.

The national team must also be picked on merit at all times for each match, taking the format and conditions into consideration. This will ensure that all players selected will know that they are there on merit and nothing else. The situation at the World Cup semi-final in Auckland last year when an injured Vernon Philander was forced to play to ensure that four players of colour were in the team. must be avoided. It turned one of the world’s great fast bowlers into a quota player; it also destroyed the morale in the team.

Finally, success does not just happen.  It needs to be strategized, driven and managed by the administrators.  Therefore, CSA needs to address this perineal problem of ICC global events seriously. They owe it to the South African cricket public and the wider cricketing world.