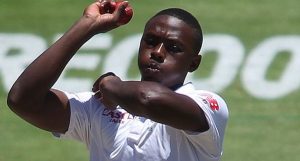 Kagiso Rabada has been a great find for the Proteas.  AFP

South Africa has in recent times struggled, especially in Test cricket with series losses to India away and England at home. They have now slipped to sixth place on the ICC Test rankings. Also, their white ball cricket has, at best, been average with their early exit in the World T20 and failing to make the final in the recent tri-nations tournament in the West Indies.

The Proteas now face a tough 18 months with away Test tours to Australia, New Zealand and England next winter. Their only easy assignment will be Sri Lanka in South Africa. The Sri Lankans, who have lost a number of iconic players, are in a re-building phase as we saw in their one-sided Test series defeat in England. They should not trouble the Proteas on home soil.

Australia and England are the best two Test teams in the world and it is difficult seeing the Proteas winning these two away series. Also, the two series against New Zealand will test this Proteas team, especially the away series early next year in New Zealand. The Black Caps have improved across all formats and have a very well-balanced squad.

Since South Africa last toured Australia and England, when they won both away series under Graeme Smith’s captaincy, the team has lost two greats in Smith and Jacques Kallis and two quality international players in Alviro Petersen and Ashwell Prince.

Also, the bowling attack of Dale Steyn, Morne Morkel and Vernon Philander, that has served South Africa so well for years, are now all the other side of thirty. On a positive note, Kagiso Rabada has been a great find for the Proteas and has been their best bowler across all formats for some time.

The Proteas’ white ball cricket will also be under scrutiny with a five-match ODI series against world champions Australia in South Africa. England has also improved in this area and they could easily dominate the ODI series in England, as we have seen in the past with South African tours. Also, both Sri Lanka and New Zealand are good white ball teams and the ODI series will be very competitive.

The next eighteen months will be crucial for a Proteas team that has slipped down the ICC rankings and to see if the country has the potential and structures to once again become a cricketing force in the world.

Also, it will probably see the end of the careers for the balance of the Smith team that took South Africa to number one in the world.