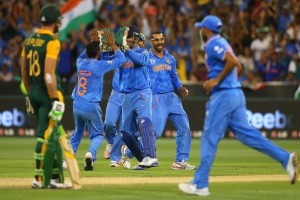 The Proteas started the Cricket World Cup in Australasia as the second favourites, if not the favourites. However, after the first two matches they have been downgraded to at best fourth.

The performances of Australia, New Zealand and India in the opening rounds have been far superior to that of the Proteas. Australia and New Zealand have not disappointed and definitely look the best two teams. India, who was not given much hope of defending their title before the CWC, has sent out a strong message with impressive wins against Pakistan and South Africa.

The Proteas have started the CWC indifferently with an unimpressive win against Zimbabwe and were badly beaten by India at the Melbourne Cricket Ground. At the MCG they did not look like one of the top teams in the tournament but one of those also ran teams that have no chance of winning the coveted trophy, very much like England.

The match against India once again highlighted that the balance of the team remains a problem. Once the Proteas have lost five wickets the opposition are through them. What would South Africa do to have Jacques Kallis in this team?

The batting remains heavily reliant on AB de Villiers and Hashim Amla and if they both fail the team struggles to set a competitive total or chase one. The middle order once again showed at the MCG that they are vulnerable against quality spin bowling. India exploited this weakness perfectly with their two spinners.

David Miller batting at five is starting to show his value as a player and the world has not seen the best of him yet at international level. However, JP Duminy once again showed that he struggles to bat under pressure, especially, when chasing a target.

The bowling unit has been a disappointment with the exception of Imran Tahir. Bowling in modern day international cricket is a difficult task but the bowling unit is much better than its current performances. It has been very disappointing.

If the Proteas are to be competitive they will need to forget about Wayne Parnell playing a role – his confidence has taken a big knock – and Farhaan Behardien is too much of a bits and pieces player. The Proteas need to play the seventh batsman in Rilee Rossouw and let Duminy be the fifth bowler. Unfortunately, they may need to leave their best bowler, Tahir, out of the team to try and find a better balance.

The game against the West Indies at the Sydney Cricket Ground is a must win situation for points and self-belief. The Proteas will start as favourites, but the West Indies are a dangerous side.  If they click on the day, who knows what can happen.