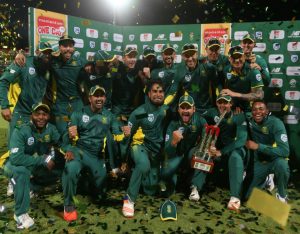 The Proteas created One Day International cricket history when they beat the reigning World Cup champions Australia 5-0 in the recent ODI series played in South Africa. This achievement in an ODI context rates alongside Ali Bacher’s team beating the Australians 4-0 in the Test series in South Africa in 1970. In certain quarters the Proteas’ achievement has been devalued because the Australian team was not at full strength, but the Proteas can simply play what is in front of them and this they did impressively.

This dominance against Australia in the ODI series will give the South Africans confidence for the three-match Test series starting at the WACA at the beginning of November. It took South Africa many years to win a series in Australia, but they have won the last two Test series there. There is no doubt that we are in for exciting Test cricket.

The two teams match up fairly evenly and the series will probably be won by the bowling attack that performs the best. The two key bowlers will be Dale Steyn for South Africa and Mitchell Starc for Australia. Both bowlers are struggling with injuries and their fitness and form will be the key to the series.

In the spinning department Australia will have Nathan Lyon, who is no Shane Warne, but is an experienced and reliable spinner who bowls well in tandem with his fast bowlers. South Africa has gone for two attacking spin bowlers in their squad, but neither has played in a Test match yet. This is a high risk decision, especially in Adelaide, if one remembers what happened to Imran Tahir on the last tour to Australia.

Australia probably has the better batting line up now that AB de Villiers is injured. David Warner is a world-class player across all formats and Steven Smith is a better Test batsman than in the other forms of the game. They will be the backbone of the Australian batting line-up. South Africa will again rely heavily on Hashim Amla, who remains a world-class player, and Quinton de Kock. De Kock will need to adapt better to the pressures of Test cricket by occupying the crease and also handling the second new ball.

Australia is historically a tough place for touring teams and this tour will be no different. Add the uncharted territory of a day/night Test in Adelaide in a three-match series and once again it will be a difficult assignment for Faf du Plessis and his team.