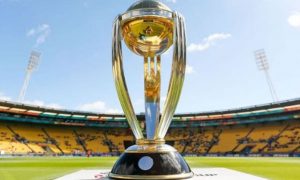 Can the Proteas realistically deliver on their Cricket World Cup dream?

Next year this time the 2019 Cricket World Cup (CWC) will be something of the past for another four years.

If Australia can’t defend their title successfully, a new champion will have lifted the coveted trophy. South Africans will be hoping that the Proteas will put 27 years of CWC misery behind them and be that team lifting the 2019 CWC. Can the Proteas realistically deliver on the dream or will it be another tournament of South African disappointment?

The Proteas are currently ranked 4th in the International Cricket Council’s One Day International rankings, but it is difficult to see this team competing against the likes of England, India, Australia, New Zealand and Pakistan. Australia, ranked below the Proteas in 6th place, will send a very different team once the ball-tampering bans have been lifted and the injury position is solved. They are the CWC champions and will defend their title with passion and guts in true Australian style.

Even though the Proteas won the ODI series in Sri Lanka, there are clear signals that CWC glory will only remain a dream. They finished the tour very much on the back foot, losing the last two ODI’S and T20 international by big margins. Sri Lanka is a poor team, only ranked above teams like the West Indies, Afghanistan and Zimbabwe. If the Proteas are to have any chance in England three things need to happen.

Firstly, Cricket South Africa will have to eat humble pie and get AB de Villiers to make himself available for the CWC, as well as the ten ODI’s against Pakistan and Sri Lanka early in 2019. If they need to get the cheque book out then, within reason, this needs to happen and also create an environment with which he is comfortable. This does not mean giving in to player power, but being pragmatic and respecting his worth to the Proteas.

Secondly, the two current all-rounders, Wiaan Mulder and Andile Phehlukwayo, need to be replaced by Vernon Philander and Chris Morris. Mulder and Phehlukwayo do not have the experience or maturity to fill these roles. At this stage of their careers they are too much “bits and pieces” to play the vital all-rounder roles that will be required to win the CWC.

Thirdly, the Proteas will need to improve their ability and confidence to play spin in a very short period of 16 ODI’s leading up to the CWC. Even though the tournament is taking place in England, international teams will bowl more than the normal expected quota of spin at the Proteas. South Africa’s vulnerability and failure against spin over the years is well documented and will be exploited. Expect most teams to bowl 20 overs of spin at the Proteas.

Without implementing creative strategies the Proteas will have no chance, failing like their predecessors did, and the South African CWC misery will continue for at least another four years.