Piedt takes man of the match award in debut test 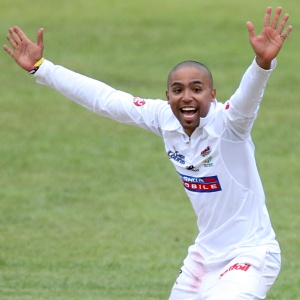 Off-spinner Dane Piedt capped a stunning debut test match against Zimbabwe in Harare by claiming the Man of the Match award.

Starting their second innings with a deficit of 141 runs, Piedt was instrumental in bowling out Zimbabwe for 181, leaving the easy victory target of 41 for the Proteas. They quickly knocked off the target, winning by nine wickets with a day to spare.

At one stage it looked as though Zimbabwe might set the Proteas something of a target when they reached 80/2 at lunch. But Piedt’s guile changed everything in the afternoon session. He took four wickets in an innings for the second time in the match to give him a match return of 8/152 in only 49 overs for the best ever figures on debut by a South African spin bowler. Previously Ian Smith had taken seven on South Africa’s tour of England in 1947. Since unity Paul Harris took five in his first Test match and Paul Adams and Claude Henderson four each.

Piedt’s four wickets in the first innings were highly encouraging but his real job was to finish the business in the second and again he responded extremely well. His mix of flight and turn was simply too much for his opponents. Particularly noteworthy was that six of his scalps were top five batsmen.

In the past the Proteas have relied heavily on the seam attack to do the job in the second innings and Piedt has brought the classic combination to the team of being able to keep things tight in the first innings and play the major role in the second. His strike rate for the match was a wicket every 36.75 balls which is exceptional by any standards regardless of the assistance provided by the surface.

The victory also confirmed the Proteas’ status as the No. 1 ranked test team in the world.