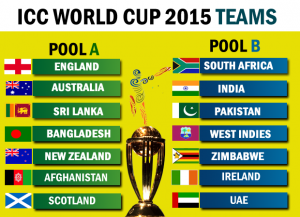 A 10-team World Cup won’t guarantee close contests all the way through, but by the same token neither can a World Cup afford mismatches on the scale the current one has.

Media speculation at the current World Cup in Australasia is gaining momentum around whether future World Cups should be smaller or more inclusive.  Stated differently, should associate members participate in the World Cup and, if so, how many?

The World Cup has had many different qualification criteria but since the first one in England in 1975 at least one associate member has always participated.  At this year’s World Cup there are 14 teams.  The ten full members automatically qualified.  The associate members played in a series of regional tournaments around the world from which four teams eventually qualified:  Ireland, Scotland, the UAE and Afghanistan.

Over the years, associate members have pulled of the occasional shock victory over a full member (e.g. Ireland beating the West Indies by 4 wickets at this year’s event) but overall these contests have been complete mismatches.

Cricket lovers the world over are all in favour of promoting the game but the World Cup is not the stage for it.  In any sport the World Cup must be its marquee event, showcasing the best possible level of skill.  Having weak teams that have neither the skill nor the experience to compete against much stronger teams only promotes and facilitates mediocrity.  The gap between the strong and weak teams at the World Cup is so vast that the weak teams learn nothing from being pummelled.

If at the start of the World Cup you already know who the quarter-finalists will be (bar one or two teams), then winning the Cup all boils down to having three good days – the  quarter-final, semi-final and final.  What is the use then of playing meaningless games against weak opposition?  Clearly it is a format in need of fixing.  A 10-team World Cup won’t guarantee close contests all the way through, but by the same token neither can a World Cup afford mismatches on the scale the current one has.

It could be argued that international sport ought to be more inclusive and therefore associates should play in the World Cup.  But thinking about them once every four years isn’t really being inclusive, is it?  Rather than fighting for a spot at the World Cup, shouldn’t the associates be fighting for the right to play more ODI’s on an annual basis against the full members..?

Perhaps the real issue is the default qualification of all the full members.  In the four years since the 2011 tournament, Zimbabwe and Bangladesh’s ODI records are atrocious.  And that of the West Indies not much better.  What justifies their participation other than the fact that they are full members?

Here’s a suggestion:  The ICC ODI ranking already ranks 16 teams – the ten full members and six associates afforded ODI status.  Make the next World Cup a 10-team tournament with only the top eight teams in the ODI ranking six months before the start qualifying automatically.  The last eight then play in a pre-World Cup tournament (or whatever format) for the final two places.  The 4-year cycle between World Cups will put equal pressure on all teams to be at the top of their game to ensure automatic qualification (eliminating some meaningless ODI series as a by-product) and it will give the likes of Ireland, Afghanistan and Scotland a fair chance of getting into the top eight.