Our indebtedness to the English 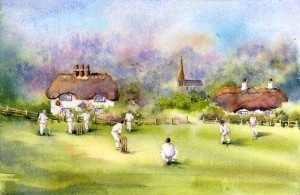 Our indebtedness to the English

Having never played there, the notion of “a season’s club cricket in England” was always rather esoteric. In 2009 we negotiated a contract for the former Proteas left-arm spinner, Robin Peterson, to play for Nelson Cricket Club in the Lancashire League.  I read up on the club and its history.  Firstly, it was established in 1861.  That is before diamonds and gold were discovered in South Africa!  Secondly, some of its previous overseas professionals included West Indians Learie Constantine, Collis King and Larry Gomes, the great Indian allrounder Kapil Dev and Australians like Ray Lindwall and Steve Waugh.  I was beginning to get a sense of the significance of “a season’s club cricket”.

As one got more and more involved in the world of sport generally, not just cricket, the incredible legacy the English has given the world slowly starts dawning on you.

To understand major sports today, like cricket, football, rugby and golf, one has to go back roughly 150 years when these sports were first codified and formalised. The first clues are in the names they’ve always had: The Royal & Ancient (R&A) for golf, the Marylebone Cricket Club (MCC) for cricket, the Rugby Football Union (RFU) and the Football Association (FA).  The RFU and FA don’t even have the word “England” or “English” in their names.  It is as if there is no other. What were once amateur groups set up to serve Victorian values (fair play, chivalry, etc.) now preside over multi-billion dollar industries

But there is a darker side to this legacy too. Last year English-born but now South African historian, Dean Allen, published the seminal work “Empire, War & Cricket”.  It tells the story of the establishment of the Karoo town Matjiesfontein by an intrepid Scotsman, James Logan, around the time of the Boer Wars.  However, the wider, and ultimately more significant, theme is how the English used cricket, rugby and football as vehicles to transplant their Victorian value systems in South Africa.  The process was followed all over the Empire.

It is therefore rather ironic that having fought them bitterly for decades, the English gave the Afrikaners something that still defines them more than 100 years later: Rugby.

Globally the English spawned something which matters big time. Sport has become not only a major beneficiary but also a principle agent of globalisation: Sport bounces ideas, fashions (e.g. the iconic baseball cap) and cultures around the world.

The English legacy is equally important in explaining effective sports marketing and branding. It is no coincidence that St Andrew’s, Wimbledon, Lord’s and the Masters could sell out tickets for their respective events many times over.  History drives much of what makes sport powerful.

So next time you walk onto the village green for your town’s derby cricket match or you torpedo kick the oval ball, spare a thought of thanks for the English.