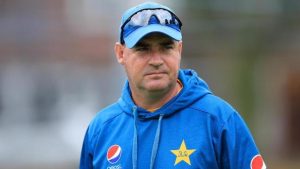 Mickey Arthur has emerged as arguably the best international coach in the world today.

The growth of T20 cricket around the world has resulted in two distinct types of coaches emerging in the modern era. The T20 game uses mainly high profile, recently retired players with very little experience of coaching, like Jacques Kallis and Ricky Ponting. International cricket makes much higher demands on coaches with regard to experience, time, management, and building and sustaining teams than it is for T20 coaches.

Mickey Arthur has emerged as arguably the best international coach in the world today. To achieve this profile and level of competency has taken him the better part of twenty years of coaching at the international level. He has a unique record of having coached three major teams successfully in his career: South Africa, Australia and Pakistan.

During his tenure with South Africa Arthur was the first South African coach ever to win a series in Australia, and also the first to win a series in England after its readmission to world cricket. Under his guidance the Proteas also became the ICC’s number one ranked Test team. For various reasons he never received the full credit for his achievements with the Proteas.

Arthur was the first non-Australian appointed national coach by Cricket Australia. He took over a team that was divided because of a personality conflict between the captain, Michael Clarke, and a senior player, Shane Watson. This resulted in there being no unity in a team that was vulnerable due to a generation change. It ended with him being relieved of his position on the eve of an Ashes tour of England and replaced by Darren Lehman.  However, Australia still won eleven of their nineteen Test matches during his tenure.

Arthur’s third and most successful international appointment was with Pakistan. He has enjoyed great success with a team that had a history of a high turnover of coaches. He has transformed the team into a unified group and instilled in them the self-belief that has been missing since the days of Imran Khan. Their victory against India in the Champions Trophy, played out before a television audience of over a billion people, must be the highlight of his coaching career.  Add to this the two drawn Test series against England in England and two Test victories at Lord’s by a young Pakistan team. This clearly indicates the impact he has had on Pakistan cricket.

Over the years the Cricket World Cup has eluded Arthur as a coach, but with the confidence and improvement in the Pakistan team they will be a strong contender for the 2019 CWC in England. If Pakistan wins the World Cup it will make Arthur one of the great international coaches in the history of world cricket.