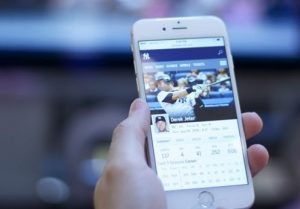 Advances in internet delivery and affordable mobile devices mean we can catch up on sport anywhere, anytime.

The pace of change in content delivery has enabled the sports industry to flourish in recent decades.  40 years ago we were very excited to see highlights of the Springboks’ overseas matches a few weeks later in cinema news reels.  With the advent of television, we were introduced to a new world of live broadcasts.  India’s domination of the purse strings in world cricket is built solidly on television rights, something that’s happened in front of our eyes (no pun intended) over the last 25 years.  The incredible variety of content on offer on television (think SuperSport’s plethora of channels) is surely the pinnacle?

Think again!  In the last decade technology has changed sport once more.  No longer are we restricted to broadcast schedules and whatever the broadcasters decide to dish up for us.  Advances in internet delivery and affordable mobile devices mean we can catch up on sport anywhere, anytime.  That’s great news for fans, but traditional broadcast business models are facing significant challenges.  Sports organisations can now deliver content directly to fans – live or on demand – with more options for new revenue streams without any great capital expenditure.  In short, technology is disrupting what was considered to be a stable commercial model – one that was previously dominated by an exclusive set of rights holders and broadcasters.

With technology as the enabler, consumption is set to increase dramatically.  Most significantly it will also afford fans glimpses of past glories and legends, experiencing moments that changed a sport forever and which help explain the landscape today.  The depth of content available for commercialisation is tremendous and the opportunities to reach fans unparalleled.  A satisfied fan base delivers greater commercial returns, which in turn fuels investment at grass roots level, increased levels of participation and the development of the sporting heroes of tomorrow.

But what is an e-fan?  Very broadly speaking it is anyone who “consumes” sport not in the traditional way (i.e. watching a sporting event in person or live on television) but by using cutting-edge technology.  An e-fan’s love of sport is unquestionable and has a thirst to re-experience historical sports moments, but he wants to watch it what he chooses and with the technology (literally) at his fingertips.

Recent research in the United Kingdom (UK) has revealed an astonishing appetite among e-fans for sports content.  Nearly 50% of people 18 years and older watch sport in some form or another on their mobile devices at least once a week; around 15% do it every day.  It is impossible for live sport to keep up with this demand, which as a result has increased the demand for access to good quality footage of recorded and historic sport content.

Even though the internet and web searches should enable us to find what we want, the feedback from the e-fans is that finding content is still not easy.  What’s more, even if the content is located, poor visual quality means that the enjoyment that e-fans should experience is lacking, leaving many disappointed.  There is no denying the fact that there’s a clear market opportunity here.  As one slightly disgruntled e-fan put it:  If I had access to footage of watching Carl Lewis break the 100m 10 second barrier in clear, high quality footage, why wouldn’t I want it?

Even more astonishing, the research has revealed that not only do e-fans want sports moments digitally available to them, but they are very happy to pay to benefit from the better experience it would give them. The internet has created a world of limitless possibilities; and apps have made these possibilities infinite and instant.  When surveyed, 50% of 18-29 year olds in the UK were willing to pay up to £10 a month to watch their favourite sports content on an app, compared to less than half this number (22%) of over fifties.

The South African sports market is perhaps not as sophisticated as the UK’s yet, but it would certainly be growing in the same direction.  The demand from fans for sport content in this country is going to look a whole lot different in the not too distant future.  Sports bodies and sponsors in South Africa will have to be aware of this.