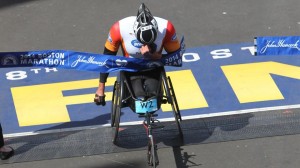 “Kids will grow up knowing they can be professional racers and make a living.”

This was the reaction of South Africa’s champion wheelchair athlete, Ernst van Dyk, at a press conference yesterday in Boston where it was announced that all the World Marathon Majors (WMM) will have an official wheelchair section from next year.

American pharmaceutical giant Abbott will be the official sponsor of the wheelchair sections of the WMM.  For the first time, a male and female winner will be determined over a twelve-month period based on scoring earned via results from six iconic global races.  Each will be awarded US$50,000.

Van Dyk, a record 10-time winner of the Boston Marathon and an active international wheelchair athlete for the past two decades, described the new series on his Twitter account as “a game changer” and “the best news ever”.  He will be aiming for his 11th Boston title on Monday.