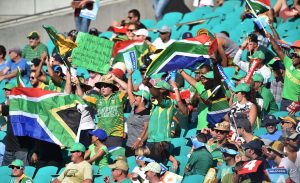 There is always something special about cricket in England.  It’s the birthplace of the world’s second most popular team sport and despite what whoever thinks, Lord’s in London in still the game’s spiritual home.  Whether it’s village cricket, county cricket, the Ashes or a day at Lord’s, cricket, summer and England are synonyms.

A week from now the biggest spectacle in cricket, the four-yearly Cricket World Cup, returns to its birthplace.  Millions of tourists will flock to England to attend the 48 matches played at eleven different venues.  Many of them will no doubt make use of the opportunity to also do some sightseeing.

I recently discovered an England travel guidebook from 1955, “Here’s England” written by Ruth McKenney and Richard Bransten.  It’s a sort of Lonely Planet guide 1950’s style.  To my surprise and delight, the book had an entire chapter devoted to cricket!  Although the book is firmly aimed at the American tourist, it has universal appeal.

The writers start the cricket chapter by beseeching any visitor to watch a cricket match:  “A tourist who does not see at least one cricket match at Lord’s is, in my opinion, no tourist at all, and ought to be stripped of traveller’s cheques (remember them!) and passport and ignominiously cashiered back to the United States by slow freight.  Cricket is fundamental to England, like canals in Venice, or snails in Paris, or glaciers in Switzerland.”  Howzat for an introduction!

In typical English fashion the writers then go on to berate Americans for scorning cricket: “There is a theory that cricket is (a) dull and (b) impossible to understand, except for 50,000,000 Englishmen, 8,000,000 Australians, 400,000,000 (about) Indians, and assorted South Africans, West Indians and New Zealanders. Anybody not hopelessly dim-witted can get a reasonable grip on cricket, enough for a delightful afternoon at Lord’s. Naturally, cricket, a profound, subtle game, cannot be probed to its depths by the casual visitor – but then, you don’t have to know batting averages by heart to watch the World Series (i.e. baseball).”

Even though only a few thousand will have the chance to attend a match at Lord’s during the World Cup, all the fans flocking to England will certainly identify themselves with these sentiments.  But heaven knows how the writers thought they would persuade Americans to watch cricket by such a tongue-lashing!  Perhaps this is why cricket is still not big in America.

However, I’m positive the thousands of fans in England will scoff at this description of a 1950’s cricket crowd: “Cricket is not supposed to be hysterical; it is meant to be restful to watch and fun to play.  Loud noises, at a cricket match, are bad form.  Little boys, carried away by emotion, sometimes cheer out loud, but a brisk round of applause is the most noise countenanced at Lord’s – or on the village green.  It is this easy, relaxed, pleasant atmosphere that makes cricket delightful.”

In so many ways, the following of cricket has come a long way since this 1955 description.  Whether you like your cricket loud, hysterical and “carried away by emotion”, or like McKenney and Bransten restful, easy and relaxed, the World Cup will definitely provide something for all fans.