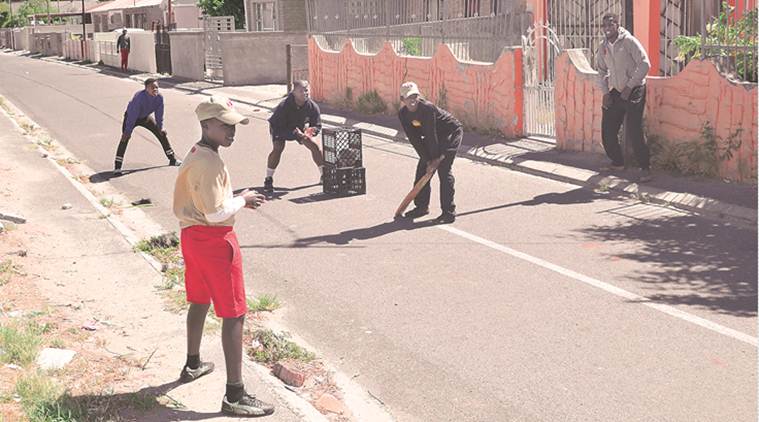 The boys were playing cricket and couldn’t be happier.

My parents live in a small village up the West Coast, Aurora.  It is on Google Maps, I promise.

It is just off the N7, about 170 km from Cape Town.  The nearest place with a hospital and Woolworths, Vredenburg, is half an hour away.  There are 112 houses in Aurora (I know this for a fact because my daughter recently did a geography assignment on the town) and the permanent populations is just over 1,000.

Lying in the foothills of the Cederberg mountains, Aurora is postcard pretty.  It is a meeting place for local farmers but otherwise the town is unremarkable.  In summer it can get hot, but the locals regard 40°C as mild.

On such a “mild” Saturday afternoon my mom asked me and my dad to drop off a basket of freshly baked beskuit at tant Maria in Rietvlak.  Rietvlak is a remnant of apartheid, the corner of Aurora where the Coloured people used to, and still mainly, live.

Outside tant Maria’s house, in the shadows of massive eucalyptus trees, we saw boys playing cricket in the street.  As the boys picked up the crate they were using for wickets and moved out of the street for us to pass, a few recognised my dad and enthusiastically waved at us.  My dad has helped them before to get cricket kit – broken pads and gloves that no one cared for anymore from a sports shop in Vredenburg, old bats and balls from his mate’s club in Paarl.

We stopped.  (There is no rush in Aurora.)  As I got out of my air-conditioned car, the oppressive heat hit me like a ton of bricks.  I was sweating already.  The boys didn’t care.  They were playing cricket and couldn’t be happier.

We joined their game.  I sent down a few joint-creaking offies with a sand-filled tennis ball and then, for a moment, surveyed the scene from my position at mid-on.  Was there any difference in the enjoyment cricket offered between a dusty street in Aurora and the hallowed turf of Newlands?  I think not.

I asked one of the boys if he enjoyed playing cricket.  He looked me straight in the eyes and without hesitation answered:  “Meneer, krieket is onse game in die somer.  Ons speel elke dag.”

As we drove away I wondered how many games like that were being played across South Africa on that Saturday afternoon.  If boys were playing in a little town like Aurora, then surely hundreds more were being played on school fields, in township streets and backyards, on beaches.

Cricket in South Africa is in its biggest mess since 1992.  It’s a rudderless ship and it needs to be fixed quickly.  No one has all the answers, not even the suits in Melrose.  Now is the time every cricket-loving fan in this country must make a constructive contribution, in whatever way, to steer this ship to calmer waters.  If nothing else we owe it to the thousands of boys and girls playing cricket in the streets in places like Aurora, because for them “krieket is onse game in die somer”.